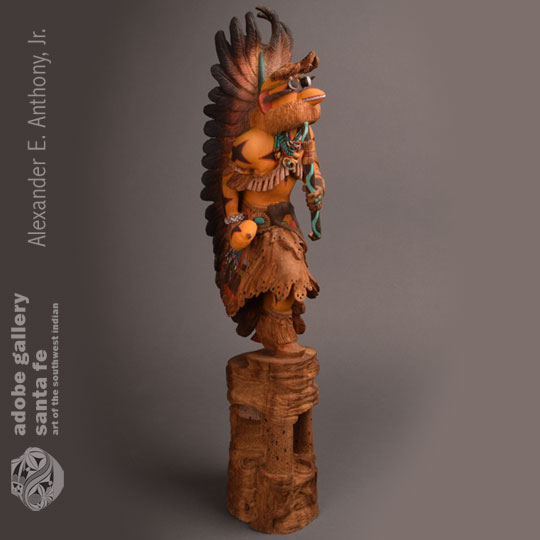 Hopi Pueblo artist Kevin Pochoema’s Yellow A’hote Katsina doll is truly spectacular. A’hote’s most immediately striking characteristic is his size. At nearly 22 inches in height—the largest Pochoema katsina doll that Adobe Gallery has ever seen.  Remarkably, a single intricately carved piece of cottonwood comprises the majority of the piece. To this main piece of wood, just a few details were attached: A’hote’s bow, rattle, eyes, and three feathers. Most of A’hote’s details—which are many, and which are of particularly high quality—protrude from the main piece of wood. That means that they must be planned and executed with incredible care, as mistakes cannot be easily corrected.  Pochoema’s work here is, incredibly, just as intricate as the work we see on his smaller-scale pieces. The four feathers that extend outward from the top of A’hote’s head are most impressive when the viewer is aware that they were not attached to the piece.

The doll is depicted mid-stride, carrying a bow in his left hand and a rattle in his right.  His kilt and its various colorful adornments drape elegantly over his knee, as he makes a step upward. One cannot help but notice that A’hote’s colors are absolutely gorgeous. The yellow used for his chest, mask, and rattle is particularly strong. Star designs made of black and red decorate A’hote’s shoulders, arms, chest and face, complementing the rich yellow perfectly. Turquoise and gold, used primarily for A’hote’s jewelry, add a dose of bright color to the piece. A’hote’s elaborate feathered headdress merits praise, too. Each and every one of the dozens of feathers includes a series of small lines extending outward from a single line down its center. Their coloring, too, is impressive, with each feather undergoing a dramatic shift from light to dark as it extends away from the headdress’ center.  Pochoema’s process for creating these feathers is quite laborious, but the results are astounding. When discussing a significantly smaller previous creation, he noted that the feathers’ lines and coloring took days to complete.

Pochoema’s Yellow A’hote stands atop an ornate base that is about 7 inches tall.  The base is decorated with elaborate cliff dwellings and signed “Pochoema” next to A’hote’s right foot.  According to the artist, the piece was in production for about a year and a half. He worked on A’hote intermittently while completing a large number of smaller pieces.  When asked to estimate how many working hours this incredible carving required to complete, Pochoema responded, “Oh, man, I have no idea!” We are pleased to offer this Yellow A’hote to our collectors, as it is one of the finest contemporary Katsina carvings that we have ever had the pleasure of handling.

Kevin Pochoema (1965- ) is a Hopi katsina doll carver.  Pochoema was born in Flagstaff, Arizona, on February 2, 1965.  At one point, he lived in the Hopi village of Bacavi on Third Mesa. Pochoema now resides just outside Santa Fe, New Mexico.  He is a member of the Greasewood clan. His works have been featured prominently in numerous books about Hopi carvings and are included in many prominent public and private collections.  He has received many prestigious awards and accolades for his works. Pochoema is generally regarded by collectors and scholars as one of the best contemporary Katsina doll carvers.

Barton Wright’s Kachinas: A Hopi Artist’s Documentary provides an excellent description of the A’hote’s appearance and function: "A'hote may appear in any of the directional colors but the two most common colors are the yellow A'hote (Sikyahote) or the blue (Sakwahote). In a Plaza Dance it is not unusual to see a line of Sakwahote with several Sikyahote, and a white or red form as well. All indications in his costume point to inspiration from a Plains-type warrior, particularly the feather headdress.  A'hote may appear in the Mixed Kachina Dances, or the Palölökong Dances and the Plaza Dance. In his left hand he very frequently carries roast or boiled corn that is given out to the audience during his performance."

Provenance: directly from the artist