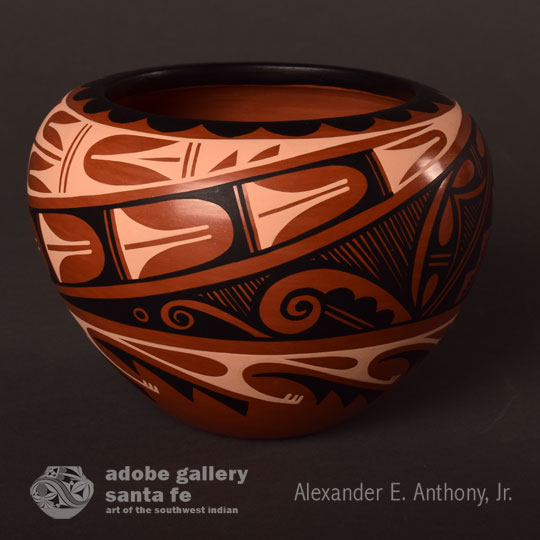 Caroline Loretto deftly painted beautiful spiraling water motifs along with fine-line hatching on this perfectly formed Jemez pottery jar. On an exquisitely polished red background she used a combination of black and cream colored paints to create a series of designs that evoke the sense of clouds, rain and flowing water-elements necessary for a successful harvest.

According to the oral history of the Pueblo of Jemez, the production of pottery at the pueblo ceased in the early 1700s when tribal members destroyed hundreds of vessels so they would not be seized by the Spanish. For the next 200 years, Jemez people depended on their neighbors at Zia Pueblo for their pottery needs. Not until the middle of the 20th century was the manufacture of pottery tradition re-established.  The new tradition of Jemez pottery is characterized by well-formed vessels with design elements that reflect the influence of their Keresean neighbors at Zia as well as a variety of water, plant and animal motifs.

Caroline G. Loretto (b. 1953) comes from a family of potters. Her grandmother was Acoma potter, Lupe Aragon. Caroline learned to make pottery from her mother, Cecelia Loretto. Along with her sister, Geraldine Sandia, she is known for her deep polish and fine painting. Her work has been published in Greg Schaaf's book Southern Pueblo Pottery: 2000 Artist Biographies and Al Hayes and John Blom's book Southwestern Pottery: Anasazi to Zuni.

- Southwestern Pottery: Anasazi to Zuni by Hayes and Blom.