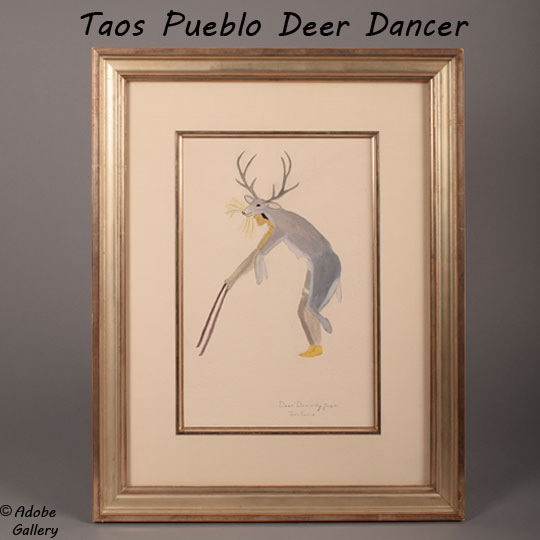 This original painting was created by Taos Pueblo artist Juan W. Mirabal. It is a depiction in watercolor of a ceremonial Deer Dance, during which a pueblo man becomes a deer by wearing its hide and antlers. He leans forward onto a pair of short staffs and simulates the movements of the animal. Those who have had the privilege of attending a pueblo animal dance will appreciate Mirabal's spirited portrayal.

Mirabal's work with this image fits within the guidelines of the traditional "flat style" by focusing on a profile view of a ceremonial dancer and not including any kind of background or environmental element. His watercolors lend a soft touch to the scene, and the decision to use only a few colors gives the image a charming simplicity. We've only handled two of Mirabal's works in the past, and neither was in the "flat style," so it is a pleasure to come across this rare example from one of the "Three Taos Pueblo" painters.

The painting is titled and signed Deer Dance by Juan, Taos Pueblo in lower right. It is framed in high-quality materials by Justin's Frame Designs of Santa Fe, New Mexico.

Taos Pueblo artist Juan W. Mirabal (1903-1970) was one of the artists who comprised the group known today as the Three Taos Pueblo painters. The other two were Albert Lujan and Albert Looking Elk Martinez. These artists were known for painting in a realistic three-dimensional Euro-American style in the early 1900s, largely focusing on landscapes and Taos Pueblo itself. Mirabal seems to have experimented more frequently than the other two artists, creating works in the aforementioned style as well as works that are closer to the "flat" style practiced by artists at neighboring pueblos.