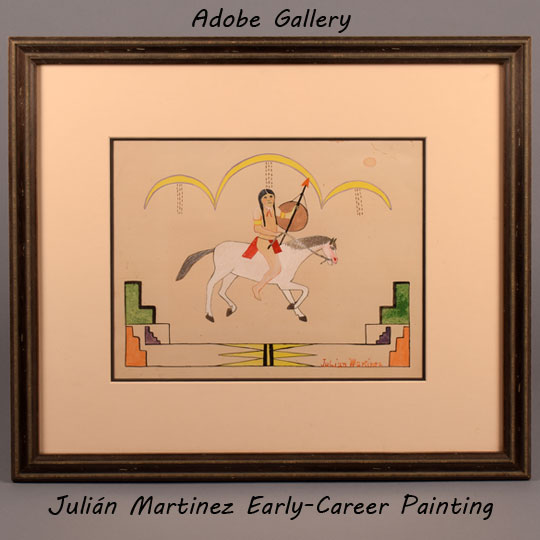 This original painting is an early-career piece from San Ildefonso Pueblo artist Julian Martinez.  Though it’s not dated, we would estimate that it was created in the early 1900s, when painting on paper was new to the Pueblo people.  It is worth noting that this was prior to the establishment of a studio at the Santa Fe Indian School, so formal training had not yet become an option for Martinez and his peers.

Martinez’ subject here is one that would remain a favorite subject for the artist throughout his short but fruitful career: a warrior on horseback.  This example shows an evolving young artist with a lot of energy.  Later examples would be more refined, but this one excels in character in spirit.  Above the warrior, a storm pattern dances through the sky, blessing the warrior and his people with moisture.  Down below, a stylish pattern of interlocking kiva step designs appears, grounding the warrior and balancing out the image.  This is a wonderful example of an early-career period of experimentation and discovery for an artist who would go on to become quite significant.

The painting is signed Julian Martinez in lower right.  It is framed in high quality materials—conservation glass, a wide off-white mat with gray interior band, and a carved wood frame with a gray stain.  On the back of the painting, Martinez sketched a Pueblo dancer in pencil.  The framer cut a window in the backing and covered it in plexiglass, allowing the viewer to see Martinez’ sketch.

Condition: good condition for its age, with some discolorations around edges

Provenance: this Julián Martinez Early-Career Painting of Man on Horseback is from the collection of a gentleman from Virginia