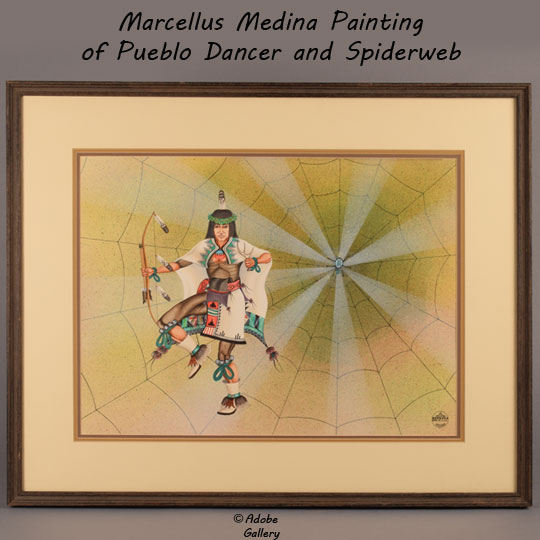 This original painting was created by Marcellus Medina of Zia Pueblo. The viewer will notice the influence of Rafael Medina, the artist's father, in the pueblo dancer depicted in this image. It's the depth, color and detail of the figure that are most notable, and those strengths were apparent in Rafael's work as well. This dancer moves toward the viewer, which provides a wonderful view of the intricately captured body and dance regalia. A large color palette and careful shading add realism. The background is a massive spider web, which expands outward from a point off to the right of the painting's center. A six-legged creature—the artist's unique vision of a spider, perhaps, or possibly something else that's been caught in the web—sits at the center of the web. The background is further enhanced by atomized paints in green, gray and red.

The painting is signed Marcellus Medina, Zia and marked with the artist's hallmark version of the Zia symbol.

Marcellus Medina (b. 1954) is a Zia Pueblo artist. Marcellus is a native of Zia Pueblo, the son of Sofia and Rafael Medina and great grandson of the renowned Zia Potter, Trinidad Gachupin Medina SRA'EITI'. He might be best known for making pottery with his wife Elizabeth Medina (b. 1956). For their collaborations, Elizabeth makes the pot and Marcellus provides the painted designs. Medina's works on paper vary in style quite a bit but always pay tribute to his pueblo heritage.

Provenance: this Marcellus Medina Painting of Pueblo Dancer and Spiderweb is from a private collection