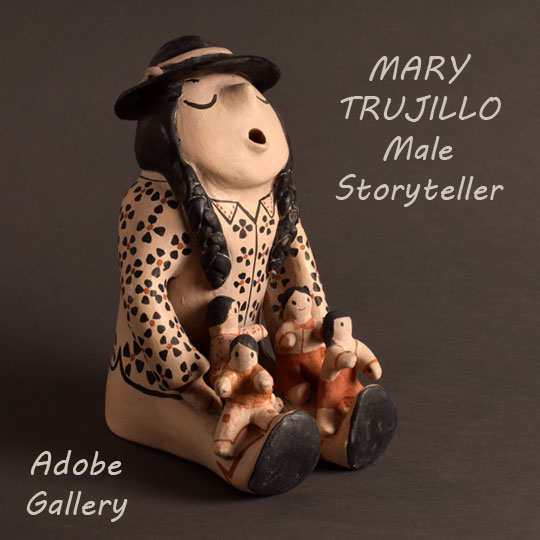 Mary Trujillo developed a unique style of male storyteller with braided hair and a black hat.  He has his eyes closed and mouth open in traditional form.  His shirt is beautifully decorated with a pattern print.  The four boys sitting on his legs seem alert but maybe occupied in something other than listening to the story.  Each of them wears highly decorated clothes with one wearing a micaceous-slip shirt.  Their eyes are a strong black and their mouths are painted in orange color.

The boy near the foot on the left leg apparently held a bow in one hand and an arrow in the other, but both are now missing.  The other boys show no evidence of having held anything.

Mary Trujillo (b.1937) was originally from Ohkay Owingeh Pueblo, the daughter of José and Leonidas Cata Tapia. Mary was mentored by her mother, who was an excellent San Juan pueblo potter.  When she married Leonard Trujillo, she moved to Cochiti and has lived there since. Mary soon switched from San Juan style pottery to Cochiti style, under the tutelage of Helen Cordero. Leonard was the adopted son of Helen Cordero.  Mary first made pottery figurines in the early 1980s.  She still lives at Cochiti but is no longer active in making pottery.

This storyteller figurine is one of Mary's earlier ones.  It was purchased by us from the artist in 1982 and sold to a client from whom we now have it back to sell again.  It is signed Mary Trujillo Cochiti on the underside.