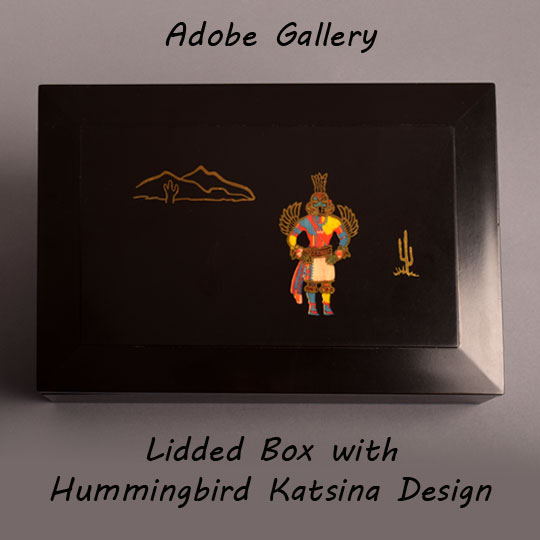 This box with Katsina imagery was intricately fabricated from phenolic resin material which is resistant to alcohol, boiling water, and cigarette burns, making it the perfect addition to any home use. The inlay was constructed from different techniques involving woods, metals, shells, coins, plants, and crystals, depending on the subject being featured.

The Couroc Company was founded by Guthrie Courvoisier and his wife Moira Wallace in 1948.  Prior to creating the company, Courvoisier ran the Courvoisier Galleries in San Francisco, which he inherited from his father in 1934.  In 1937, when Walt Disney premiered Snow White and the Seven Dwarfs, Courvoisier saw a chance to represent a unique line of art—a desire of his that would grow in scope and vision, ultimately leading to the creation of the Couroc Company.

In 1938, Disney granted Courvoisier the exclusive right to market their original animation art. The art sold exceptionally well, but, in 1942, the Courvoisier Gallery closed to produce plastic parts for military aircraft. This too would ultimately fuel the successful creation of Couroc products. Courvoisier’s wartime efforts gained him valuable experience with different plastics.  He was able to take that experience, and his expertise with design and innovation, and develop a proprietary formula of phenolic resin that was durable enough to form into trays and bowls, and lidded boxes. [The Hour website]

Provenance: this Mid Twentieth Century Lidded Box with Hummingbird Katsina Design was purchased for display in the Garcia Street short-term rental property which has recently sold.