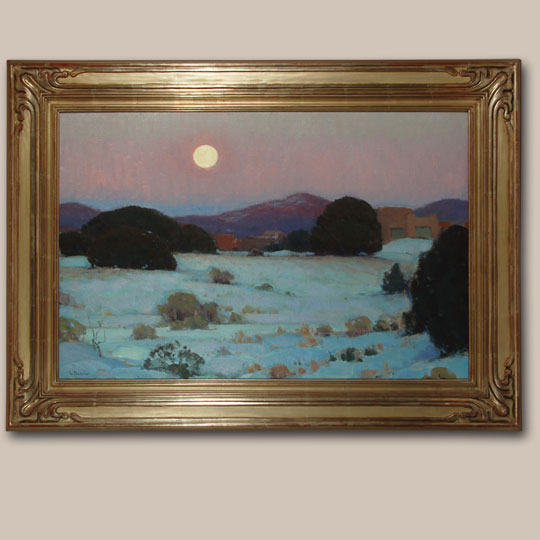 Award winning artist Glenn Dean decided early in life to become a painter and although he took a couple of workshops in outdoor painting, he basically is a self-taught artist.  He chose to self-study the great California artists, particularly Maynard Dixon and Edgar Payne whom he felt painted scenes as they were meant to be painted.  He paints on location and particularly likes the landscapes of the Southwest for subject matter.

In this painting, one’s mind cannot help but revert back to Ansel Adams’ “Moonrise Over Hernandez,” as an inspiration for this title, but the similarities end there.  Dean has beautifully presented the low adobe homes nestled in the foothills of Santa Fe’s Sangre de Cristo mountain range.  The homes blend into the landscape with their earth colors and snuggle beneath the pink hues of the sky and the purple of the range.  An excellent representation of the facts that exist.

Dean gained recognition early in his career. He has twice been honored as the cover artist for Western Art Collector magazine, and has appeared in several national magazines including Western Art and Architecture, Art of the West, Southwest Art, and American Artist. Dean has won a number of awards including his most recent, the Gold Thunderbird Award (Best of Show) at Maynard Dixon Country. Select awards include the first ever Emerging Artist Award presented by Art and Antiques Magazine, and the Grand Prize and Artist Choice Award at the inaugural Tucson/Sonoran Desert Museum Plein Air Invitational. -Artist's website

The painting is signed in lower left but not dated.  It pre-dates 2011 as it has been in the collection of the present owner since that date.