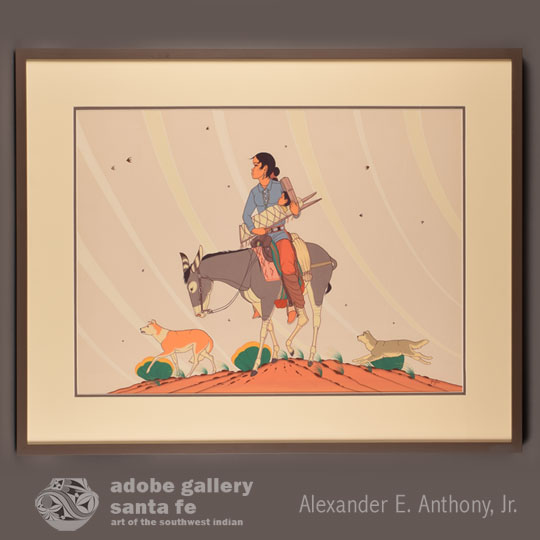 Diné artist Beatien Yazz excelled at creating pleasant, accessible depictions of life on the Navajo reservation.  This large, colorful watercolor painting is a product of that skill. As far as subject matter goes, this is a quintessential Diné painting.  It features a horse, a woman in traditional Diné clothing, two dogs, and just a touch of the land on which they live. The woman carries an infant, wrapped tightly in a cradleboard.  Her body faces the viewer, her head is turned to her right. Her horse appears to be making a right turn as well, towards the direction to which the dogs seem to have already committed. That each of the figures, along with many of the birds circling the sky above, are all facing the same direction gives the image a strong sense of movement.

All of this was executed with the great care that collectors expect of Yazz.  As per the artist’s usual, his human subject’s face is a highlight of this image.  This face, with its gentle lines and its expression of focused determination, is particularly strong.  The linework is excellent, too. A close study reveals precise brown outlines that are augmented in certain areas with additional lines in a lighter brown, adding depth in a subtle but effective manner.  Yazz’s color choices here are strong but tasteful—everything is bold and bright but nothing feels exaggerated. The large scale of the piece allows ample space for a vast, open sky. A series of softly curving parallel lines crosses the sky, somehow amplifying the effects of the image as a whole.  This is a classic Diné painting, and an exemplary image from this important artist.

The painting is signed “B. Yazz” in lower right.  It is framed beautifully using archival materials, under a wide off-white mat in a gray frame.  A thin interior mat matches the frame’s gray color.

This painting includes a tag indicating that it was entered in the 1975 Red Cloud Indian Art Show, in Pine Ridge, South Dakota. It was entered by Woodards Indian Art Gallery in Gallup, New Mexico.  There is no indication if an award was or was not given. The tag identifies the title as “Navajo Madona”, which we assume to be a misspelling of “Navajo Madonna.”

Beatien Yazz (1928-2012) Little No Shirt (Jimmy Toddy) was a painter who was born in 1928 on the Navajo Reservation.  At an early age, Yazz met Bill and Sallie Lippencott, traders at the Wide Ruins Trading Post. They recognized Yazz’s talent and made available to him scraps of paper and other equipment so that he might practice his artwork.  Alberta Hannum’s book Spin a Silver Dollar told the story of the Lippencotts and the young Navajo boy they encouraged.  The book was illustrated by the boy himself—Beatien Yazz. He served in the U.S. Marines in World War II and was a member of the famed Navajo Code Talkers. Following the war, he returned to the reservation and began to paint in earnest. He specialized in subjects familiar to him in his daily life on the reservation. He has been eminently popular with collectors since the 1950s.

Provenance: from a New Mexico collection