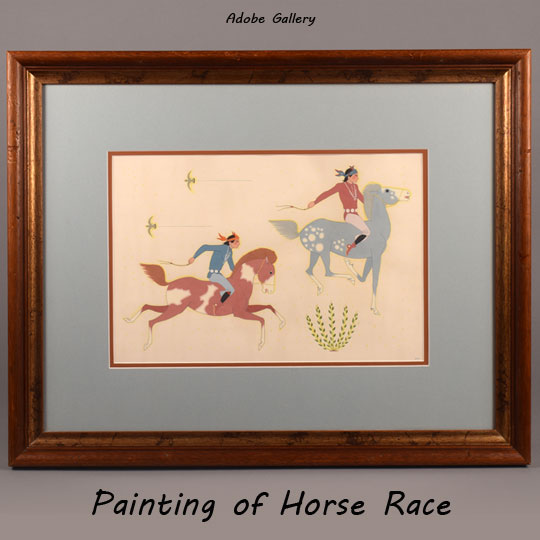 This exceptional original painting was created by influential Diné of the Navajo Nation artist Harrison Begay.  Those who are familiar with Begay’s work will recognize this as an early-career piece, completed before the artist found and settled comfortably into the style for which he’d become well known.  With many of the early Pueblo and Diné artists, early-career works are simpler, more repetitive, and less refined.  To some, this means less desirable, though we’d argue that what they lack in technical mastery they make up for in energy and spirit.  Begay, however, took a different path, and his early works are considered by many to be his most desirable.  They are rich in “hungry young artist” energy, they’re full of character, and they are notably excellent on a technical level.

The painting features two Diné men on horseback, racing across the Navajo Nation at full speed.  Each man stares straight ahead, looking focused and determined.  Their right arms hang behind, raising their makeshift riding crops.  The horses are wide-eyed, with mouths hanging open, clearly working as hard as they possibly can.  Two birds dash across the sky in the opposite direction, and a single plant appears near the lower right corner.  Interestingly, Begay added a pattern of subtle yellow spots over the entirety of the otherwise empty background and surrounded each of his figures with a thin line in that same yellow.  This piece is a fine example of the unique and beautiful character of Harrison Begay’s early works.

The painting is signed H. Begay in lower right.   It is framed under two layers of matting in a carved wood frame.

Harrison Begay (1917-2012) Haskay Yahne Yah “The Wandering Boy” was a world-renowned Diné of the Navajo Nation artist who is generally regarded as one of the most successful and influential early Native American painters.  Begay studied under Dorothy Dunn at the Santa Fe Indian School in the 1930s, and then attended colleges in North Carolina and Arizona. From 1942 to 1945, he served in the US Army Signal Corps.  In 1947, Begay returned to the Navajo reservation, where he enjoyed a long and productive career as a painter. He is known to have continued painting into his 90s. Begay passed away in 2012, leaving behind a large body of work and a legacy in the world of Native American art.