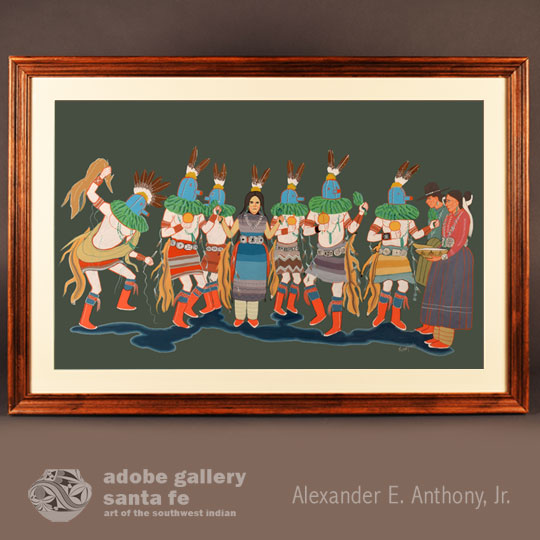 Diné painter Artist Andrew Van Tsihnahjinnie is recognized as one of the finest of 20th Century Navajo artists.

This painting by Andrew Van Tsihnahjinnie features nine figures positioned in a row across a wide area.  In the center, a female stares directly towards the viewer. She wears a squash blossom necklace and large concha belt.  Three figures dance on each side of the central female. On the far right side, two traditionally dressed Diné people hold baskets of corn meal.  A blue cloud rest below their feet, representing their collective shadow. Tsihnahjinnie’s work here is detailed, lively, and strong in color. The painting is completed on a dark green paper that complements the image quite nicely.

When researching this painting, we consulted with a Diné artist who has a great deal of knowledge pertaining to Diné ceremonial functions:  “It may represent a new female counterpart of the yeii dance. I really do not recall having seeing this being performed in an actual ceremony. The two people standing on the far right are the patients. They hold baskets containing corn meal. The figure gesturing with a fox pelt on the far left is water sprinkler. The five figures surrounding the female are ordinary male yeii dancers.”

The painting is signed Tsihnajinie in lower right, and framed in a simple wood frame.

Andrew Van Tsihnahjinnie (1916 - 2000) was a Diné painter who was born near Chinle, Arizona. He attended elementary school at the Indian School at Fort Apache, but ran away and returned to the reservation. He then attended school in Santa Fe and became a student of Dorothy Dunn at the Santa Fe Indian School. He was an excellent student and was known to have stayed in the studio painting until forced to return to the dormitory. Following his graduation he went to work as an illustrator for the Indian Service.

Dorothy Dunn spoke highly of Andrew Van Tsihnahjinnie.  She thought he displayed “incisive interpretation, spontaneity of brushwork, originality of color, vigor of draftsmanship and vitality of action and that he had no equals among the artists of the Santa Fe Indian School studio and perhaps few superiors among modern painters.”  She thought he might well be “one of America’s top-ranking painters. In the brief seasons when he felt freed to paint the things he knew so deeply, without troubled concern for doing otherwise, his work attained a trenchant beauty, unique in modern art.” Dunn 1963

Tsihnahjinnie’s works are included in many prominent public and private collections, and are published in most of the major texts which relate to Native painting.  Tsihnahjinnie passed away in 2000.

Condition: this Untitled Navajo Painting of a Diné Ceremonial Scene by Andrew Van Tsihnahjinnie is in excellent condition