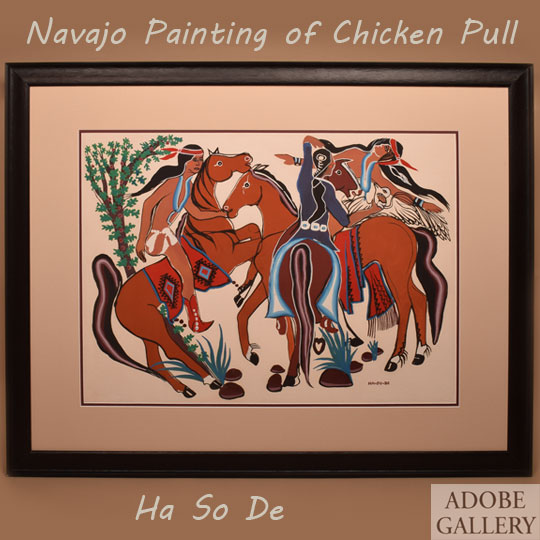 This large and beautiful Navajo painting was created in the 1970s by Diné painter and silversmith Narciso Abeyta.  We have handled many of Abeyta’s works over the years, but we never grow tired of studying them. In fact, the opposite is true—we are always excited by the arrival of a Narciso Abeyta painting.  His wonderfully unique style and wide variety of themes have made him a favorite among our staff and clients. Abeyta was a true individualist. His enduring popularity speaks to the quality and singularity of his vision.

This untitled painting’s composition is unusual and ambitious.  Abeyta’s subject here is a “chicken pull.” In this competition, a number of people on horseback attempt to pull a mostly buried chicken from the ground.  After someone successfully unearths the chicken, the other participants attempt to steal it. Here, we see three human figures in total. Two men on horseback face each other head-on.  The man on the left leans forward to maintain his balance as his horse bucks back onto its hind legs. The man on the right leans—or falls, perhaps—backward, with arms outstretched in each direction.  In the center, a woman whose back is turned to the viewer holds the chicken by its neck. She is calm, cool and collected, sitting comfortably on her horse as the men grapple with their animals. They’re trying to steal the chicken, of course, but it looks as though they’re not succeeding.

Abeyta’s atypical style really shines with images like this.  In the hands of another artist, this scene might feel violent or excessive.  When rendered in Abeyta’s loose, dreamy linework and exceptionally strong colors, the action-packed image feels beautiful and alluring.  Interestingly, Abeyta chose to use naturalistic colors for the majority of this image. Anyone who’s even vaguely familiar with the artist knows that he usually used wild, surreal color schemes.  Here, he strayed from reality only within the horses’ tails, while otherwise sticking to that which we’d see were we watching this chicken pull occur. At about 22 inches in height by 30 inches in width, this painting is larger than the majority of the artist’s works.  Its larger scale magnifies its effect considerably. We are pleased to have the opportunity to present this outstanding painting by one of our favorite Native American painters.

The painting is signed Ha So De in lower right. It is framed underneath museum glass in a black frame, under a wide off-white mat. A thin interior band matches the maroon color of the woman’s horse.

Narciso Platero Abeyta (1918-1998) Ha So De was a painter and silversmith from the Diné culture. He was also, among other things, a Golden Gloves boxer and one of the hundreds of Navajo Code Talkers who served in the Marines during World War II.  He and wife Sylvia Ann had seven children, many of whom—Tony Abeyta, Elizabeth Abeyta Rohrscheib and Pablita Abeyta—became notable artists themselves. He is highly revered by collectors of Native American paintings, and his works are included in numerous prestigious public and private collections.

Abeyta received his initial art education at the Santa Fe Indian School, whose art instructor Dorothy Dunn commented on his abilities in her book American Indian Painting of the Southwest and Plains Areas:  "Ha-So-De developed a markedly unique style, although, in his formative period, his admiration for the work of (Navajo painter Andy) Tsihnahjinnie could be clearly seen.  It was a fine influence and used honorably by the younger painter. His paintings of hunt and home scenes were broad in brushwork and flowing in line, at times appearing almost nonchalant. He was never concerned with small detail but only with the sweep and dash of movement in wild, free scenes.  His was a positive art." He received further education at the University of New Mexico, where he studied under famous modernist painter Raymond Jonson. Abeyta passed away in 1998.

Condition: this Untitled Navajo Painting of Chicken Pull by Narciso Abeyta is in excellent condition