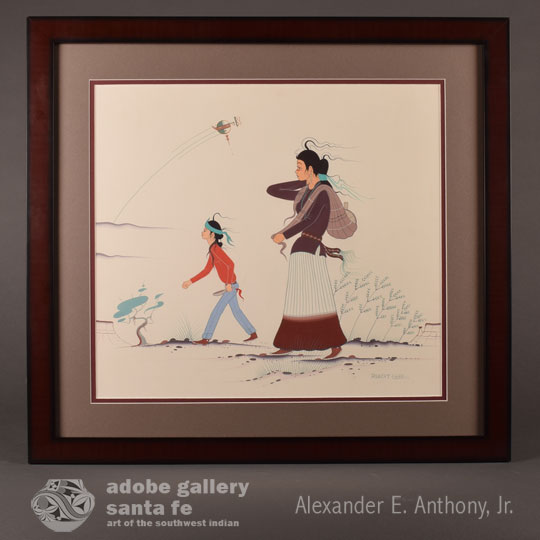 This Navajo painting by Robert Chee will appeal to collectors who appreciate traditional Diné imagery.  Chee’s subjects here—a Diné woman and child walking together—are depicted in true profile. Their faces might remind the viewer of those created by Chee’s influential predecessors Harrison Begay and Gerald Nailor.  They’re tactfully composed yet gentle and whimsical, with certain features exaggerated just slightly. The mother, carrying a heavy load, looks tired. The child, walking ahead of the mother, is grinning. Traditional Diné symbology decorates the sky above the travelling pair.  The artist’s bare-bones depiction of Navajo reservation—sloping ground lines, rocks, plants, and distant mesas—resembles the work of Beatien Yazz. It’s a strong, charming image.

Information presented in Clara Lee Tanner’s Southwest Indian Painting: A Changing Art suggests that this piece was completed late in Chee’s short career: “Early in 1969, Chee began to make some changes in his paintings. Black paper was replaced by grays or even white; colors became much softer; and better composition gave a completely different feeling to his watercolors.  There is still much action, symbolic design, and whimsy in the unmistakably Navajo faces.” Tanner also notes that Chee’s early works did not include ground lines or other details of setting. For these reasons, and because of the exceptional quality of design and color, we can say with confidence that this piece was completed late in the artist’s career.  Chee passed away at just 34 years of age. Works like this one suggest that, had he lived a longer life, Robert Chee might have gone on to become one of the great Diné traditionalist painters.

The painting is signed Robert Chee in lower right.  It is framed under glare-resistant acrylic in a simple frame, with two layers of matting in complementary gray and maroon shades.

Robert Chee (1937-1971) was a Diné artist who studied commercial art under Allan Houser at Utah’s Intermountain Indian School.  Chee was in the military from 1958 to 1961. He painted murals in Army buildings in Germany during that time. He had a short but very active career. He is noted for two-dimensional, strongly decorative work with bright colors. He adhered to all the characteristics of traditional Navajo painting. He frequently used dark backgrounds on his paintings and often used gold paint. His work is very fluid and with exceptional detail and finesse. He was an exceptional painter. It is a tragedy that he did not live longer.

Condition: this Untitled Navajo Painting of Diné Mother and Child by Robert Chee is in excellent condition