Navajo Painting of Fawn Playing in Snow by Robert Chee 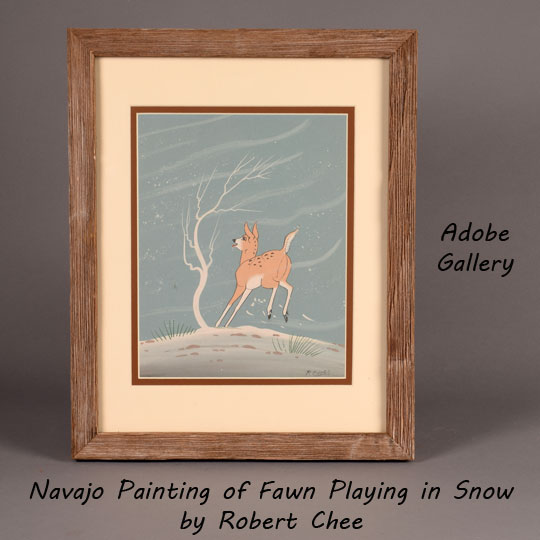 This original painting was created by Diné of the Navajo Nation artist Robert Chee.  It is a skillfully composed depiction of a fawn playing in a light snowstorm.  The fawn bounds along with its mouth open and its tongue hanging out, clearly enjoying the weather as it reaches the top of a small hill.  A snow-covered tree emerges up into the blue sky, which is decorated with wavy streaks of snow and wind.

Chee’s work is reliably stylish and attractive.  Here, he leans more toward realism than usual, leaving out the decorative elements and stylized touches that often hover around the edges of his images.  The white-over-blue color scheme shows hints of that style, though, and the rocks and plants peeking through the snow are reminiscent of those seen in the works of earlier Diné painters.  This is a beautiful image from a talented painter.

The painting is signed R. Chee in lower right.  It is framed under plexiglass and two layers of mat board, in a wood frame.

Did you know? All fawns lose their spots after they are three or four months old. Mother deer often hide their youngest baby deer in vegetation while they forage for food to protect them from natural predators. Source: Outdoors Being website.

Provenance: this Navajo Painting of Fawn Playing in Snow by Robert Chee is from a private New Mexico collection