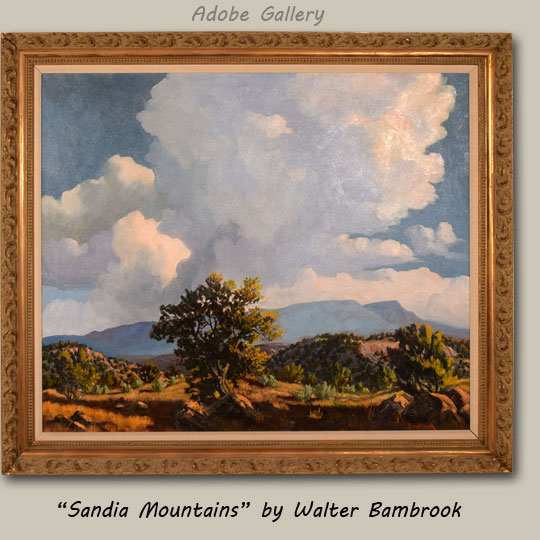 This original painting, titled “Sandia Mountains”, was created by New Mexico artist Walter Bambrook.  At 40 inches by 48 inches, it is an enormous piece with a powerful presence.  The decision to use this large scale was a wise one, as it afforded Bambrook ample space in which to depict a beautiful moment.  Bambrook’s respect for the physical beauty of the Southwest is evident in the painting’s fine details, but he succeeds on a larger level, too.  The painting successfully conveys the feeling of wonder that one might experience in the presence of a dramatic desert sky.

In the foreground, a lively palette of yellow and green tones captures sunlight-soaked plants and rocks.  Remarkably crisp details appear and then fade away, becoming pleasantly blurry further into the distance as the desert hills roll away from the viewer.  The titular Sandia Mountains play a small but essential role in the painting, separating the foreground landscape and a massive sky with a hazy wave of purple and blue.  Gorgeous cloud formations occupy most of the image, covering the sky in bright white, stark gray, and soft purple tones.  The depth and richness of these forms invites exploration and doing so is a true pleasure.  “Sandia Mountains” is an excellent offering from Walter Bambrook.

The painting is signed Bambrook in lower right.  It is framed in a tastefully carved gold frame.

Walter Bambrook (1910-1984) was a painter who lived and worked in Albuquerque, New Mexico.  He attended Albuquerque High School and began his art education at the University of New Mexico (UNM) under the instruction of Ralph Douglas.  While at UNM, Bambrook served as a printer's apprentice for the Albuquerque Journal newspaper and began his four-year art training under Carl Von Hassler.  After his formal art education was completed, Bambrook taught many private classes and groups at UNM, the Woman's Club, and Heights Community Club.

Bambrook received his first award at the age of thirteen from a national art show at the Chicago Art Institute.  During his lifetime, he received many awards from other prestigious institutions, among them the L.O.M. Sweat Memorial Museum in Portland, Maine; the Colorado Springs Museum of Fine Arts; the Corcoran Gallery in Washington, D.C.; the Santa Fe State Museum; the UNM Galleries, and the New Mexico State Fair. His paintings are also found in private collections in England, Italy, Australia, the United States, and Indonesia. Bambrook continued to contribute to the New Mexico art community as the Director of New Mexico State Fair Exhibits, as a member of the New Mexico Artists' Equity, the Professional Albuquerque Artists' Guild, the Taos Art Association, and the New Mexico Art League.  Bambrook died on June 1, 1984, in Albuquerque, New Mexico.