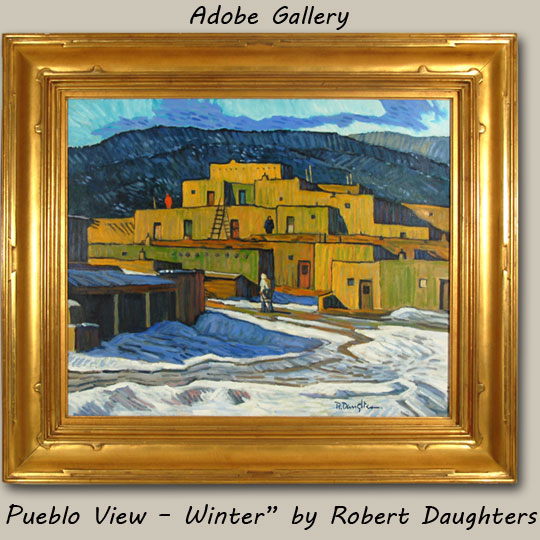 Robert Daughters specialized in painting landscapes and people of Northern New Mexico, Arizona and Mexico. At the time, he lived in Taos, New Mexico, in a house built by Oscar E. Berninghaus. Daughters was a co-founder of the group of artists known as the Taos Six. The others with him in this group were Walt Gonske, Rod Gobels, Ron Bursano, Ray Vinalla and Julian Robles.

Robert Daughters' (1929-2013) paintings may be defined as being in the Impressionist style, even though the artist preferred not to categorize his work to a single style.  Daughters was confident when putting a scene down on canvas.  He had studied the scene, determined his course of action, and began painting with assurance.  Daughters would sketch the scene on canvas and then execute it in oils.

As an artist, he analyzed the subject, absorbed its abstract manners and colors and, using an artist eye, put the scene on canvas using his own expression of shapes and colors.  His paintings are strong in execution of wide brush strokes in a very Van Gogh style, although Daughters would hate to hear that comparison.

This painting is obviously meant to reflect Taos Pueblo but represented in Daughters’ style, a view as interpreted by him when studying the scene. He interpreted the shapes of the buildings, the flow of the water in the river, and the colors reflecting off the buildings and snow.  With these in his eye perspective, he laid his impression on the canvas.

The painting is signed in lower right R. Daughters.  It is not dated, however, it was purchased in 2009 by the current owner and is not included in the 2007 book on Daughters, so it was probably painted after 2007.

Provenance: from the collection of a gentleman who purchased it in Santa Fe in 2009 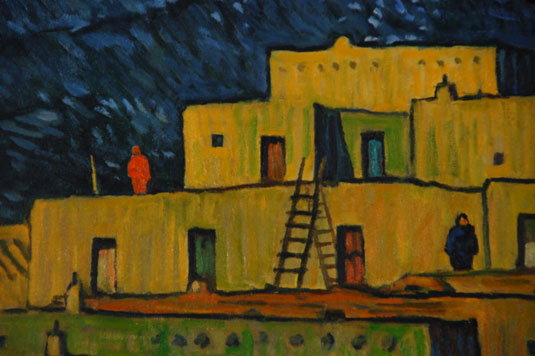