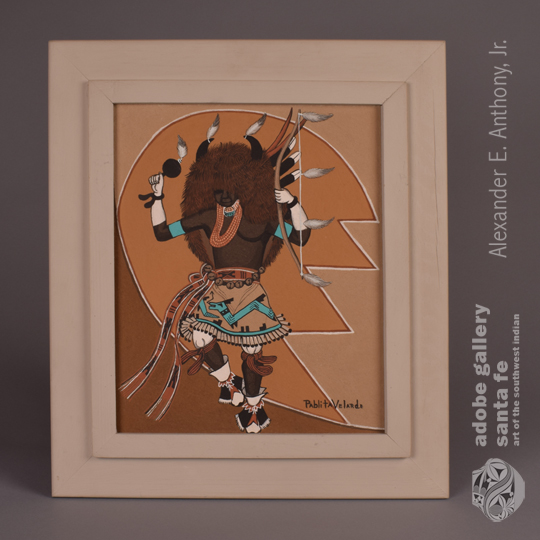 Pablita Velarde (1918-2006) Tse Tsan - Golden Dawn was an influential painter from New Mexico’s Santa Clara Pueblo.  Velarde painted in the traditional style of the Santa Fe Indian School, creating accurate portraits of Native American life and culture.  Her most frequent subjects were pueblo ceremonial dances and scenes of everyday Native life. She enjoyed a long and productive career as an artist, and is generally regarded today as one of the most significant figures in the history of Pueblo Indian art.  Her daughter, Helen Hardin, and granddaughter, Margarete Bagshaw, were also successful painters.

Velarde is best known for earth paintings, which were made with mineral and rock elements.  She would grind these minerals into powdery substances using a metate and mano, and then use the powder to create her paints.  Her most frequent subjects were pueblo ceremonial dances and scenes of everyday Native life. Pablita worked in water-based paints from time to time, mostly casein, but she is best known for her paintings rendered in the aforementioned mineral earth pigments. She would first draw her designs on Masonite panels that were treated with a coat of pumice. She then used her ground-up minerals as paint to fill in the areas she had drawn. To mix her paints, she combined the pigment with water and glue, and then painted with commercial paint brushes. She would paint each color with as many as seven layers to gain the consistency she desired. She then would outline the images—once again, as many as seven times—to ensure that they were strong in color.

Velarde’s arduous process of paint creation paid off handsomely with this wonderful painting.  Its strong color is its defining characteristic. This mineral earth painting of a Buffalo Dancer feels unusually bold and bright, despite being made mostly of various shades of brown and tan.  For her subject’s armbands and an Avanyu that decorates his kilt, a brilliant turquoise was used. Her decision to use this vibrant blue-green sparingly was a wise one, as it is quite effective in its limited appearance.  The dancer himself is of particularly high quality, too, moving directly towards the viewer while holding a bow and rattle. Velarde’s reverence for this particular dancer is clear in the details, which are reproduced carefully. Extra attention was also given to light and shadow, resulting in an image with more depth and dimension than the artist’s already excellent norm.

The painting is signed “Pablita Velarde” in its lower right corner. It is in excellent condition and is still in the original frame—the style preferred by the artist.  On the back of the frame, Velarde wrote the following in pencil: “Buffalo Dancer, Santa Clara Pueblo, 50.00”.

Condition: this Original Painting "Buffalo Dancer" by Golden Dawn is in excellent condition

Provenance: from the daughter of a now-deceased collector who purchased it directly from the artist in the 1960s