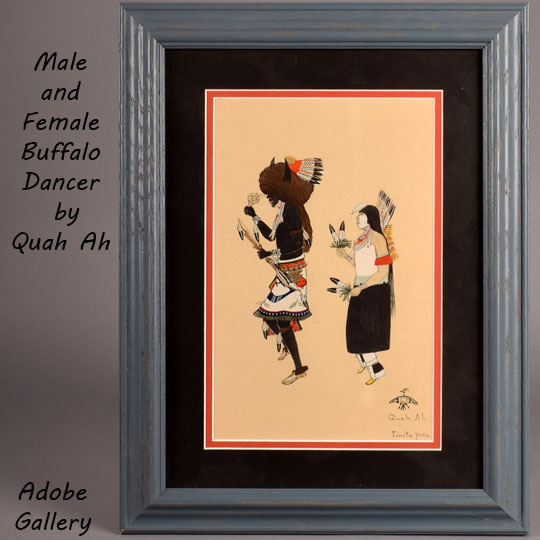 This painting of two ceremonial dancers was created by one of the earliest Pueblo Indian painters: Tonita Peña.  The artist is known for works that, like this example, feature detailed depictions of ceremonial dances.  She and her San Ildefonso Pueblo peers excelled at capturing the intricacies of their subjects’ regalia and paraphernalia.  Each member of the group managed to develop its own unique take on what would become known as the “flat style.”  Peña’s pieces stand out because of precise linework, strong colors, and alluring faces. The painting is signed Quah Ah, Tonita Peña with a bird symbol hallmark in lower right.  It is framed very nicely, under two layers of matting in red and black.  The frame itself is blue, and the acrylic pane is of the glare-resistant variety.  The signature and intricate hallmark symbol above it, suggests that the painting was created in the 1930s or 1940s.  Peña’s subjects are a female and male Buffalo Dancer.  The male Buffalo Dancer leads, holding a bow and rattle.  He wears a massive headdress with a fan of feathers.  Around his waist is a belt of small bells that ring melodiously when he moves.  Additionally, the tin cones at the hem of his painted kilt will jingle.  The female dancer follows close behind, holding feathers and evergreen boughs.  As always, the detail is fine, the colors are appealing, and the dancers’ faces are imbued with personality in a very subtle manner.  This is a fine pueblo dance scene from Tonita Peña. Peña is recognized as the first Pueblo Indian woman to make a living as a painter.  By the time she was 25 years old, she was a successful easel artist. Her work was being displayed in museum exhibitions and in commercial art galleries in Santa Fe and Albuquerque. She painted what she knew best—scenes of life at the pueblo.  She mostly painted ceremonial dances, and occasionally depicted everyday events. She did so with incredible skill and sensitivity. It is apparent in her works that she truly knew and respected each of the rituals she depicted. In the years since her passing she has come to be regarded as one of the greatest Native artists of all time.  Her works are displayed in prominent public and private collections around the country.

Condition: this Original Painting of a Male and Female Buffalo Dancer by Tonita Peña is in excellent  condition

Provenance: from a private collection from a Tennessee family

- Through Their Eyes—Indian Painting in Santa Fe, 1918-1945 by Michelle McGeough, Wheelwright Museum of the American Indian, 2009