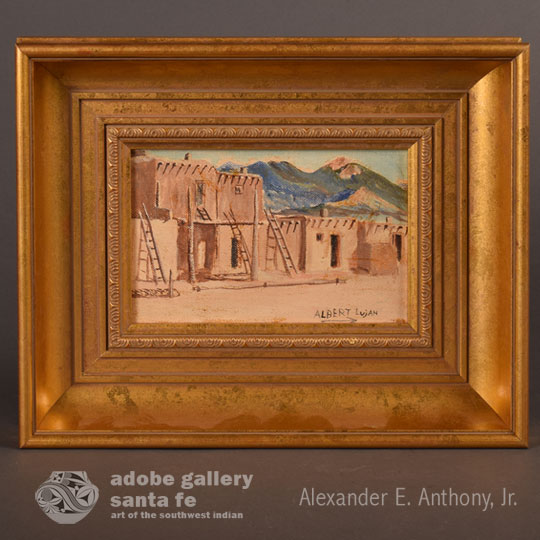 Taos Pueblo artist Albert Lujan’s paintings have an enduring popularity with collectors of Southwestern art, and this one demonstrates well why he is so collectible.   It is typical of the artist in that it is an oil painting completed on board. Lujan’s subject here is that for which he is known: his home, Taos Pueblo. Lujan found success earlier than many Pueblo artists; he set up, worked and sold in the Pueblo’s plaza. The majority of his patrons were visiting tourists, who were able to take home a hand-painted, one-of-a-kind souvenirs for just a few dollars. Today, these former souvenirs can be worth thousands of dollars.

This extraordinary painting finds the artist adding more detail to his classic depiction of Taos Pueblo.  Careful shading, richer-than-usual texture, and soft shadows contribute to its strength. The adobe buildings appear as they do in reality—soft, light brown, stacked around and atop one another with paths winding in between.  The mountains in the background are blue, green and beige; this coloring is entirely accurate. The mountains surrounding Taos are the Sangre de Cristo Mountains (Spanish for "Blood of Christ") and are the southernmost subrange of the Rocky Mountains.  They are steep, colorful, and beautiful and Lujan’s depictions always seem to do them justice.

Albert Lujan (1892-1948) Weasel Arrow was an early Taos Pueblo painter.  Lujan was ahead of his time in painting European-American style art rather than the Santa Fe Indian School style being practiced by most of the other Native American artists of his time. He, along with Albert Looking Elk Martinez and Juan Mirabal, was greatly influenced by the Anglo Taos artists of the time.  The work of all three artists was shunned by collectors and the Museum of New Mexico Fine Art Gallery because it was too much like that which the Taos and Santa Fe artists produced. Today, however, collectors and museums have a great appreciation for works by the “Three Taos Pueblo Painters.”

Lujan, who was also a farmer and minister, never received any formal artistic training.  He began painting around 1915, which would place him among the earliest known pueblo painters.  He specialized in painting the multi-storied buildings at the pueblo, usually devoid of people. Typically, these views included one of the main pueblo houses or an isolated adobe residence, each framed by beehive ovens, majestic mountains, a beautiful blue sky, and, occasionally, a ristra of chili. Lujan passed away in 1948; his works are highly collectible today.

The painting is signed “Albert Lujan” in lower right.  It is presented in an elaborate gold wood frame.

Condition: this Original Painting of Taos Pueblo Scene by Albert Lujan is in very good condition

Provenance: from the collection of a family from Tennessee