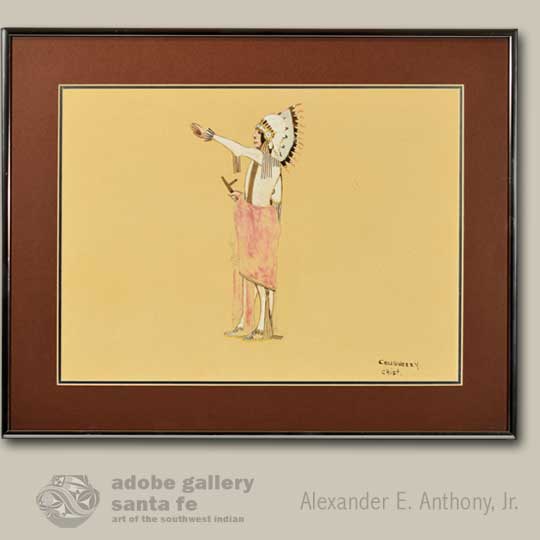 Arapaho painter and ledger artist Carl Sweezy crafted a strong, straightforward image with “CHIEF.”  There is no foreground or background, just the titular Arapaho leader. He’s depicted in profile, as was the norm, but his body’s positioning is rousing.  His right hand holds a pipe, while his left is extended outward with his palm turned down. He wears a fringed buckskin shirt and leggings, moccasins, and carries a red blanket.  Sweezy had a way with creating beautiful illustrations of his subjects’ headdresses, and this piece is no exception. Chief’s beautiful war bonnet, while composed of just a few colors, is exceptional.  Sweezy paid particular attention to the beaded headband, decorating it with translucent blue and red dots. “CHIEF” is another timeless work by this historically significant Native artist.

The painting is signed Carl Sweezy and titled “CHIEF” in its lower right corner.

Carl Sweezy (1879-1953) Wattan was a talented and influential Arapaho painter and ledger artist. Sweezy was born in 1879 on old Cheyenne-Arapaho Reservation in Oklahoma. His father was Hinan Ba Seth (Big Man) and his mother, unfortunately, died when he was very young.  Sweezy attended Mennonite Mission Schools in Oklahoma and Kansas. He also attended Chilocco and Carlisle Indian Schools. Sweezy’s Indian name was Wattan, or “Black.” He was also known as “Waatina.”  Sweezy’s style was informed by Plains ledger art, which was flourishing during his early life. He occasionally created ledger art and painted portraits, but he is best known today for his excellent watercolor paintings. Sweezy’s long list of notable exhibitions includes the American Indian Exposition, Philbrook Arts Center, and the Inter-tribal Indian Ceremonials in Gallup. His works are included in the collections of the Smithsonian Institution, Chicago Natural History Museum, Gilcrease Institute, Museum of the American Indian, and University of Oklahoma. Sweezy passed away on May 28, 1953 in Lawton, Oklahoma.

Condition: this Original Painting titled "CHIEF" by Arapaho Artist Carl Sweezy is in good condition, with a small stain and tear on the far right edge 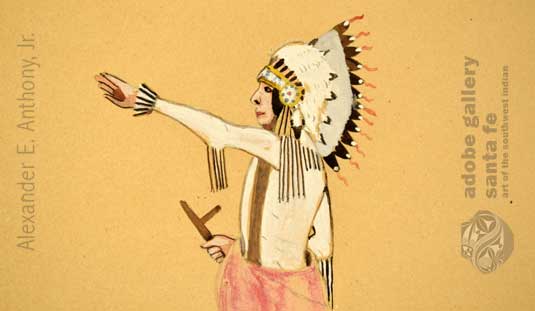 Spirits in the Art: From the Plains and Southwest Indian Cultures [SOLD]
by James A. Hanson

The Arts of the North American Indian: Native Traditions in Evolution (Paperback) [SOLD]
by