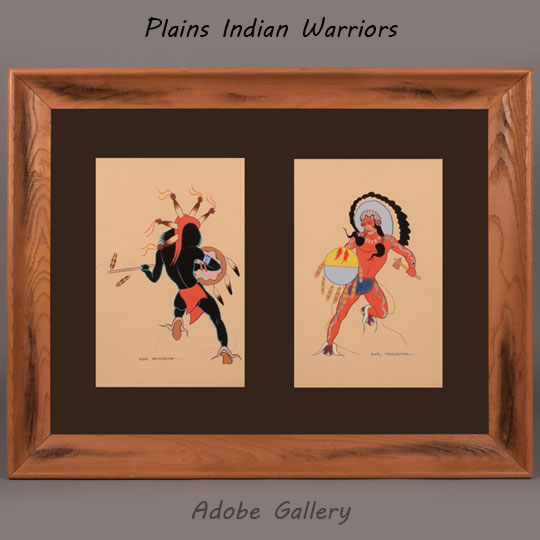 This pair of original paintings was created by Carl Woodring, an Osage Indian artist. The paintings were purchased in the early 1960s, and Woodring didn’t begin painting until 1956, so we’re able to say that they’re about 60 years old. Each piece features a Plains Indian warrior. They are positioned identically—planting the right foot and raising the left, holding a shield in the right hand and a weapon in the left—but facing opposite directions as they square off with one another. Together, they form a clever and compelling composition.

Carl Woodring’s warriors appear in bold, opaque tempera paints, with bright colors that expand upon that which we’d see in the natural world. The linework is simple and confident, defining the edges of the warriors and their weapons in strong color. Woodring added more detailed work in certain areas, most notably the headdress of one warrior and arm band of the other. These are spirited figures; when displayed together as they are here, they create an energetic scene. Woodring’s work with these two warriors is excellent.

Each painting is signed Carl Woodring. The paintings are framed together, under black matting in a wood frame.

Carl Woodring (1920-1985) Wasaba Shinga ("Little Bear") was an Osage artist. The majority of his creative effort was directed toward sculpture, but he was a gifted painter who achieved success quickly—after less than a year of tutelage under Acee Blue Eagle, Woodring was exhibiting his works internationally. He received many awards and accolades for his works, and exhibited widely and successfully. He also served in the U.S. Army Air Corps and worked as an electrical engineer. Woodring passed away in 1985. His works are rarely available on the market today.

Provenance: this Carl Woodring Pair of Original Paintings of Plains Indian Warriors is from a private United Mexican States collection, purchased in the early 1960s