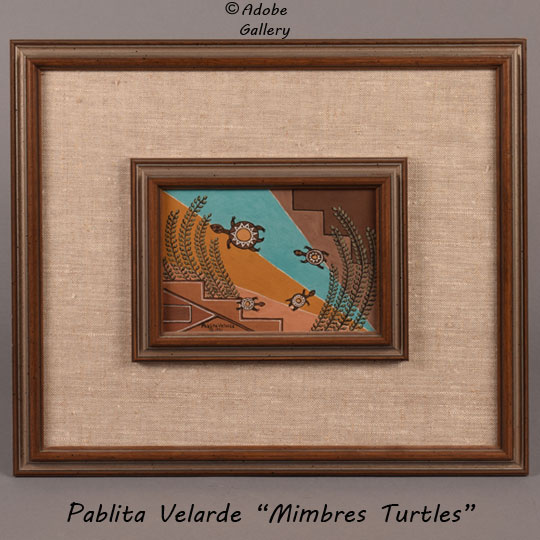 This original painting was created by Santa Clara Pueblo artist Pablita Velarde. It is dated 1981, which places its creation far into the artist's long and fruitful career. This piece is smaller than her typical offering, but it is rich in beauty, energy, and movement nonetheless.

Four turtles appear, swimming in a circle over gradually widening diagonal bands. A large turtle leads while three smaller turtles follow. Right-angled elements form kiva step and lightning patterns in the lower left and upper right corners. Two clusters of plants emerge, swaying gently in the water and providing gentle curves to balance the rigid straight lines and right angles used elsewhere. It is a strong, well-balanced composition that was executed with style and skill.

The painting is signed Pablita Velarde and dated 1981 in lower left. It is framed in a wood frame, which is mounted on a fabric backing within a larger wood frame. This was the style preferred by Velarde and her daughter Helen Hardin during this era.