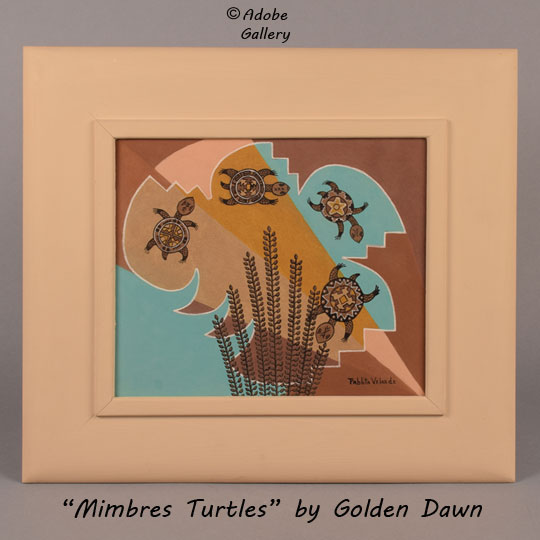 "Mimbres Turtles" is an original painting by Santa Clara Pueblo artist Pablita Velarde. The painting was completed using mineral earth pigments of the artist's own making, which gives the painting an added textural dimension. When looking closely, the viewer will notice a coarse texture that is quite different from that of the commercial paints used by many of Velarde's peers. It's subtle, but it's definitely visible, and it has an appealing natural look.

In this image, a group of four turtles swim, forming a semicircle. The largest turtle leads the way toward the cluster of plants that rises from the painting's lower border. The three turtles following behind are smaller. Each turtle displays a unique pattern of decorative elements on its shell. As the title clarifies, these figures reflect the style used by Mimbres artists. A wonderful abstract background incorporates turquoise, yellow, and pale pink tones alongside the typical tans and browns. This is a lively and beautiful scene by one of the most significant early Native painters.

The painting is signed Pablita Velarde. It is framed in the painted wood frame that Velarde preferred for much of her career.