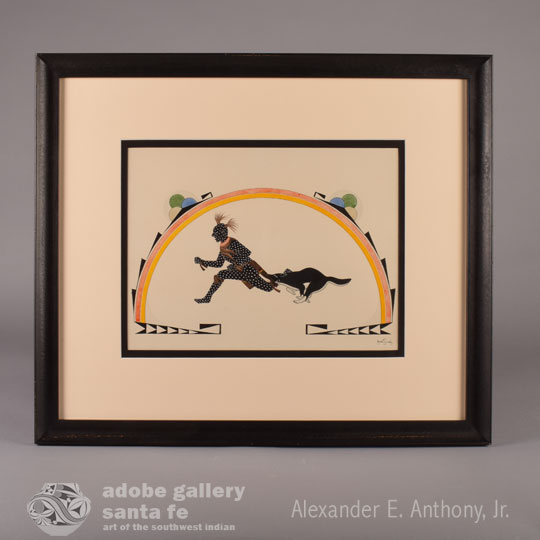 San Ildefonso Pueblo artist Awa Tsireh created a wonderful image with this watercolor painting of a dog chasing a clown. The clown is running at a full sprint, leaning forward, with a dog in close pursuit.  He’s black with white dots, which makes his sprint look extraordinary. The dog has closed in on the clown, sinking its teeth into a piece of the clown’s loin cloth. Awa Tsireh was one of the most technically accomplished pueblo traditionalists, and he always did an excellent job at handling action-packed scenes like this one.  His figures always seem to have an energy about them, with small details like expressive eyes and carefully defined facial features contributing to their individuality.

The clown and dog are positioned near the center of the image.  They’re surrounded by an attractive framing device. It’s a rainbow of sorts, made of two wide lines in pink and yellow.  Winding along the top of the rainbow are two series of triangles. On each side of the rainbow, about two thirds of the way to its top, there is an inverted rain cloud design.  These clouds are painted blue, green and gray, which is atypical but very attractive. At the bottom of each side of the rainbow, a long triangle points inward toward the center of the piece. Each of these triangles contains a series of smaller white triangles.  The ends of these designs fold over inward, toward the rainbow’s base. This is an exceptional piece from one of the most significant figures in the history of pueblo painting.

The painting is signed Awa Tsireh in lower right. It is framed beautifully in a simple black frame. The painting is placed underneath two layers of matting, with thin black mat under a wide off-white mat.

Alfonso Roybal (1898-1955) Awa Tsireh, one of the first pueblo painters, was recognized beyond his native world as an outstanding artist. His watercolors were sent by Alice Corbin Henderson to the Arts Club of Chicago for a special exhibit in 1920. His paintings appeared in early exhibits in Santa Fe, and he was among the several artists to receive prizes at the first Santa Fe Indian Market. In 1925, the Chicago papers were generous in their acclaim for his exhibit in the Newberry Library. The Exposition of Indian Tribal Arts in New York in 1931 included Awa Tsireh paintings. He is generally regarded as one of the best and most collectible pueblo painters.

Condition: this Original Painting of Dog Chasing a San Ildefonso Clown by Awa Tsireh is in excellent condition