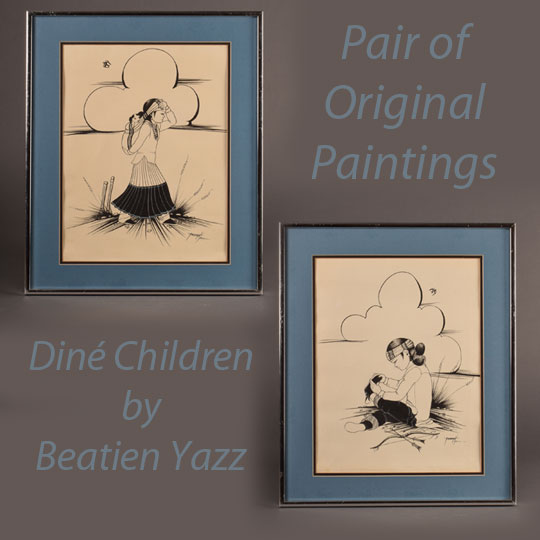 This charming pair of paintings was made by Diné artist Beatien Yazz.  In one image, a young boy is sitting down on the ground, removing his shoe.  He wears jeans and a headband, and wears his hair in a tsiiyéél—the traditional Diné bun.  On the ground next to him is a bow with two arrows. In the other image, a young girl is taking a walk.  She wears a necklace and a long skirt. A pouch, which wraps around her forehead and hangs behind her back, carries a small animal.  The manner in which their surroundings are depicted—plants, rocks, clusters of lines representing the ground, large clouds and distant birds—is typical of Yazz’ works.  Here, in black and white, his excellent linework shines.

Yazz’ decision to use black paint on cream-colored paper works wonderfully with these depictions of children going about their lives. Yazz and his Diné peers were extraordinarily skilled at finding beauty in the small moments of everyday life, and these paintings are a fine example of that classic Diné sensitivity. These are simple, strong compositions that look particularly appealing when displayed side-by-side.  They’re identical in size, and framed using identical materials—blue and black mats within thin silver frames. Each painting is signed “Beatien Yazz” in lower right.

Beatien Yazz (1928-2012) Little No Shirt - Jimmy Toddy was an influential Diné painter.  Born in 1928 on the Navajo Reservation, Yazz showed promise as an artist very early. When he was young, Yazz met the Lippincotts, traders at the Wide Ruins Trading Post. They made available to him scraps of paper and other equipment so that he might practice in color.  He served in the U.S. Marines in World War II and was a member of the famed Navajo Code Talkers. Following the war, he returned to the reservation and began to paint in earnest. He specialized in subjects familiar to him in his daily life on the reservation. He has been eminently popular with collectors since the 1950s.

Yazz is only one of his names. There is his Navajo name, which is unknown. He has signed his paintings with many variations: Beatien Yazz, Beatian Yazz, Beatian Yazzia, Beatin Yazz, and B. Yazz. Finally, there is a name that most people use, Jimmy Toddy.  Yazz was the subject of Alberta Hannum's books Spin a Silver Dollar and Paint the Wind, both of which prominently featured his artwork.  During the last 20 years of his life, he suffered from severe eye problems, which medical doctors were unable to cure. A Navajo Medicine Man said that his problems were the result of having painted the Navajo sacred Yeibichai and that to be cured, Yazz would need to undergo a purifying ceremony. He was unable to afford the expensive ceremony.  Yazz passed away in 2012, leaving behind a large body of work.

Condition: There are small discolorations and creases in the paper. The pair of paintings is priced accordingly.

Provenance: from the estate of an Arizona resident