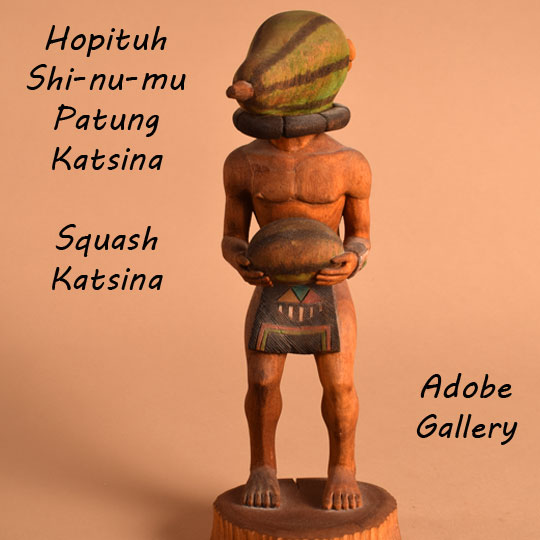 The Squash Katsina is often a favorite of collectors. He appears mostly on First Mesa as a runner. This carving was completed in December 1986 by Malcolm Fred, at which time I purchased it and sold it to a client.  It is now available again.

The carving appears to be from a single piece of cottonwood root except for the pedestal, which may have been added. The squash blossom and stem may also be added parts. The body has been colored with an oil-based stain of natural color and the other parts with oil-based stains of color.

The body proportions are executed to perfection. The calves, biceps and chest musculature are very natural for the body of a runner. Katsinas that are runners are generally the younger men who can sustain the exertion of a race.

Condition: The carving is in excellent condition. There is a minor scratch on the front of the watermelon the Katsina is carrying in his hands.

Provenance: this Hopituh Shi-nu-mu Patung Katsina - Hopi Pueblo Squash Katsina Doll by Malcolm Fred is from the collection of a family from Virginia