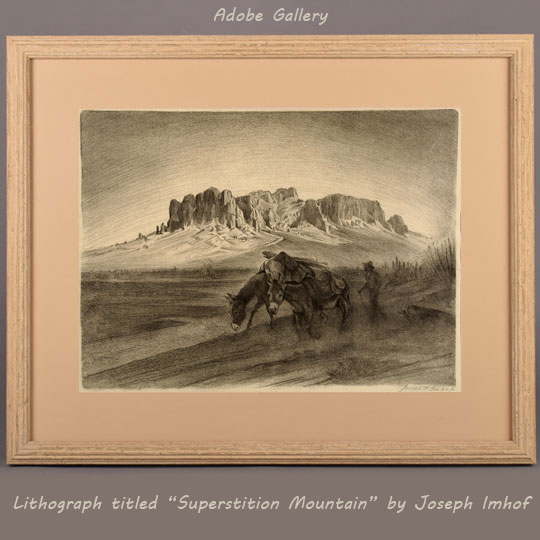 This lithograph by Joseph Imhof illustrates a farmer walking behind his saddled pack mules. Behind them is the Superstition Mountains, popularly called "The Superstitions," is a range of mountains in Arizona located to the east of the Phoenix metropolitan area. They are anchored by Superstition Mountain (see Wikipedia iimage below), the large mountain seen in this image. The shading from light at top to darker at the lower portion illustrates his adroitness as an artist and lithographer.

In 1905, Joseph Imhof and his wife went to the Southwest for the first time to record ceremonies of Pueblo Indians. He built a studio in Albuquerque in 1906 and traveled throughout the region and then lived in New York before settling in Taos in 1929. In Taos, he built his studio on the edge of the reservation facing the Sacred Mountain behind Taos Pueblo.

Joseph Imhof (1871-1955) was a master lithographer and painter who recorded images of Pueblo Indians from 1907 to 1955, a time known as the golden age of Taos, a time when artists known as the Taos Founders were producing their famous paintings. Like those other Taos early 20th century artists, Imhof painted scenes of Native American culture in and around Taos.

A hardback first edition new copy of the book “Joseph Imhof Artist of the Pueblos” is included with the purchase of this drawing.

Condition: this Lithograph titled "Superstition Mountain" by Joseph Imhof is in original condition

Provenance: this Lithograph “Superstition Mountain” by Joseph Imhof is from the estate of John and Dixie Yaple, owners of a gallery in the Hotel La Fonda de Taos from 1945-1949, and then director and curator, respectively, of The Millicent Rogers Museum from 1950 to 1977. JOSEPH IMHOF Artist of the Pueblos [SOLD]
by

Land of the Conquistadores [SOLD]
by Cleve Hallenbeck, et. al.

Rebels on the Rio Grande - The Civil War Journals of A.B. Peticolas(SOLD)
by Don Alberts