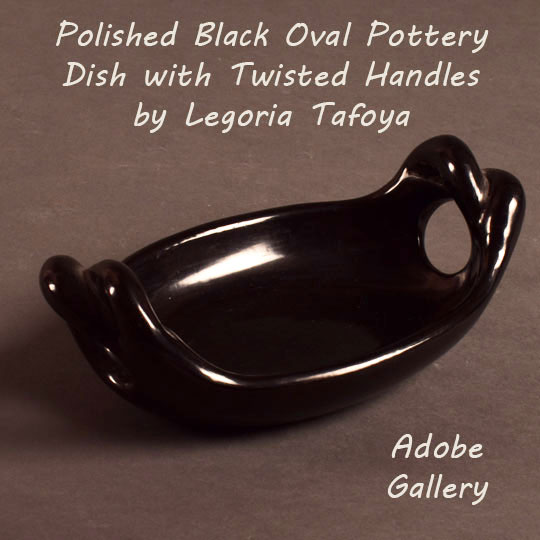 This beautifully polished black pottery dish by Legoria features twisted handles often seen in Santa Clara Pueblo engagement jars.  Legoria used such handles in many of her pottery items where handles were incorporated and on wedding vessels between the two spouts.  The dish is signed Legoria Str Clara Pueblo on the underside.

“Legoria Tafoya was one of the first Santa Clara Pueblo artists to have a brochure with her personal biographical statement.  The document states in part:

‘Along with many other children of the Rio Grande Pueblos, Legoria attended St. Catherine’s Indian School at Santa Fe…Married quite young to Pasqual Tafoya, Legoria was soon very busy with a family of her own.  Marriage, children, and the resultant responsibilities prompted Legoria to become interested in making pottery to sell to supplement the family income.

‘In 1930 Legoria learned the art of pottery making from her grandmother…Legoria’s first work consisted mostly of clever, small animal figurines, which she molded with her fingers.  Lions, bears, birds and turtles are design forms witch are much in evidence in Tewa mythology.  These little fetish-like ceramics proved to be extremely popular, and Legoria sold many of them to the tourists who came to the Pueblo…Legoria decided to exhibit her work.  At her first exhibit in 1940 she won a blue ribbon for a plain polished bowl.  This was at the Indian Market at Santa Fe…Legoria has received many awards for pottery making…” Schaaf 2000

Legoria and her sister, Pablita Velarde, and Pablita’s daughter, Helen Hardin, were artists whose works were shown exclusively in Albuquerque at Enchanted Mesa Indian Arts on the east part of town on old Route 66.  Fred and Margarete Chase, owners of the gallery, had many shows for the family and exhibited their works until Margarete Chase passed away.  Helen Hardin’s daughter, Margarete Bagshaw, was named after Mrs. Chase.

Provenance: from the collection of a family from Oregon who purchased it in 1971 from the artist.