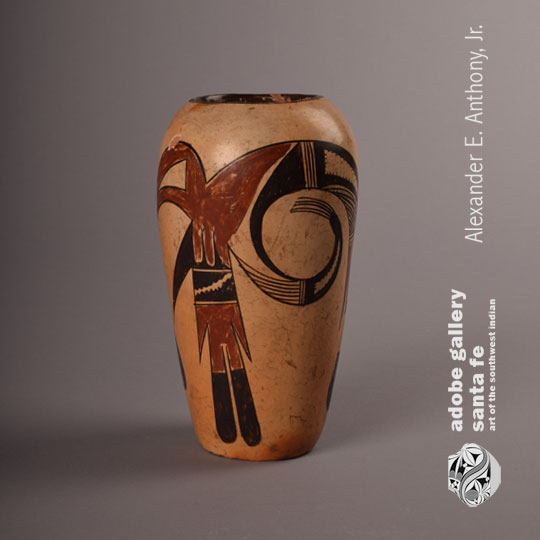 Hopi potters were quick to adapt their traditional functional shapes to shapes dictated by traders on the reservation or to the demands of tourists. Many European-American shapes were sold at the Grand Canyon gift shops and at shops throughout the Southwest. Nampeyo and her daughters were not exempt from this.  Nampeyo, in addition to fashioning exquisite large Sikyatki-shape vessels for museums and serious collectors, was well aware that there was a good tourist market for smaller vessels at the popular Grand Canyon Hopi House where she lived and demonstrated during summer seasons. This cylindrical vessel is a good example of such.

“…one area that remains poorly researched in the artistic history of this celebrated (Nampeyo) family is its manufacture of eclectic forms. Sculptural head pots and effigies are known, as well as a host of curio objects such as candlesticks, teacups, and other knick-knacks. But, surprisingly, there has been a lack of attention to masterfully crafted cylinders by the Nampeyo family.

Perhaps this is because of the misconception that the cylinder form was introduced to Pueblo ceramics in the 20th century. Nothing is farther from the truth. Among the most prized pottery objects of the prehistoric era, exemplified by a set of exquisite vessels uncovered at Pueblo Bonito, were tall elegantly sculpted cylinders.

Nampeyo was known to have made such vessels during the late 1890s, as documented in photographs from the period.”

There is no doubt that Nampeyo made this exquisite cylindrical vase. The beautiful crackling of the base slip is indicative of its age and the meticulously painted design of the two Sikyatki stylized birds is of the quality of Nampeyo’s hand.

Condition: The Polychrome Hopi-Tewa Pueblo Cylindrical Pottery Vase by Nampeyo vessel is in excellent condition. There is one small abrasion at the head of one of the birds and minor paint abrasions at the rim.  There is one small slip in this same area of this vase.

Relative Links: Nampeyo of Hano, pottery, prehistoric, The Legacy of a Master Potter