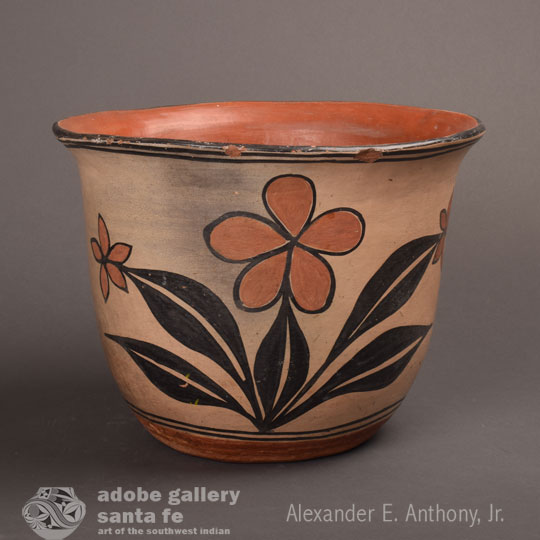 This Kewa - Santo Domingo Pueblo pottery jar is truly a piece of ethnographic art and history. Historic Pueblo Pottery such as this example are no longer made today as there is no demand for using native pots as planters. To find one made in the pre-1940 era in such good condition is a rarity.

This is a marvelous jar that is traditional in every way except for the vessel shape. It was probably made circa 1930 and exhibits the classic traits of late Santo Domingo Polychrome. The neck interior is red-slipped and stone polished. It has a black rim top. The under body is stone-polished bare paste. The cream/off-white is rag-wiped bentonite slip with black and red vegetal designs. The off-white slip extends almost completely to the bottom of the vessel. There is the customary red band that was wiped on over a portion of the red underbody. There are double framing lines at the top and bottom of the design area. Both pairs have ceremonial breaks.

The shape of the vessel suggests that it was made for use as a flowerpot. Five holes drilled in the bottom further substantiate this thought. It is a marvelous early example of a piece of pottery made exclusively for non-Indian use. Pieces like this were popular with travelers to the Southwest who wanted a souvenir to take back to their Victorian homes in the East, as well as Santa Fe residents who used them in their adobe homes.

Since the interior was completely stone polished, the exterior was protected from moisture damage. It does not appear that the vessel was used as a planter; however, there is a little abrasion at the interior bottom but none on the exterior.