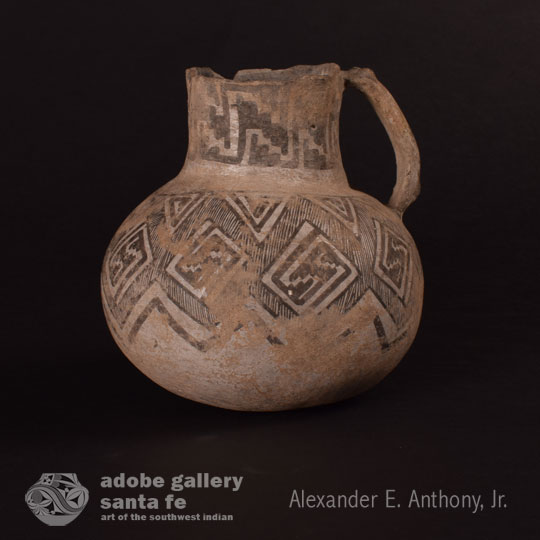 This prehistoric pottery vessel with separate body and neck designs is in the shape of a jar with a handle that appears to be an animal with eyes and tail in relief.  The designs on the globular body are triangles and squares with black hooked elements which float amongst fine parallel black lines. The neck designs appear to be repeated from the interior of the square elements on the body.  The bottom of the jar is slightly rounded. All of the designs were applied with a rich black pigment.

There is much to learn about the cultures of the Greater Southwest—a very large area of what is now the North American Southwest and Northern Mexico Southwest—areas that were once one and not divided by state borders or country boundaries.  In the mid- to late-1300s, it was all one indistinguishable land mass peopled by prehistoric cultures. Some have defined the Greater Southwest as extending from Durango, Colorado, to Durango, Mexico.

Condition: relatively very good condition with rim damage and paint abrasions.  It does not appear that there has been any restoration or repair.

Provenance: this Prehistoric Black on White Pottery Jar with Handle is from an unknown estate

Recommended Reading: FROM THIS EARTH—The Ancient Art of Pueblo Pottery by Stewart Peckham