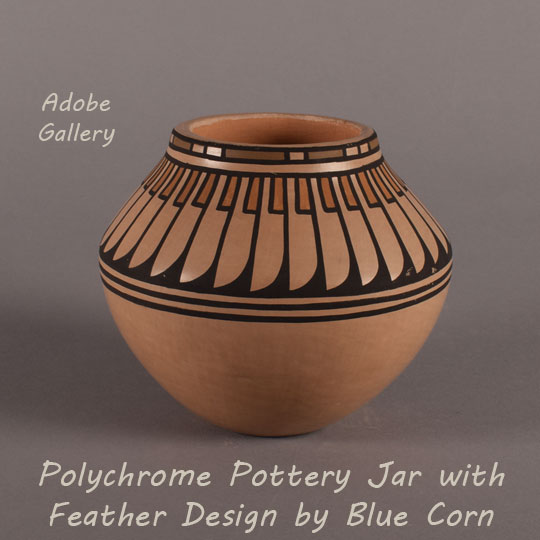 San Ildefonso Pueblo potter Blue Corn and her husband, Sandy, spent two years in the 1960s experimenting with slips to revive the 19th-century Polychrome wares of San Ildefonso Pueblo. She stone polished the base slip in the manner in which it was done before the introduction of the Cochiti slip in 1905, which required only rag polishing. In doing this, she achieved a highly-burnished finish. To this she applied the matte paint design at which she had become so adept. This polychrome jar is an excellent example of her polychrome revival style.

This jar takes on a form that was used often by Blue Corn, Maria Martinez, and many of their contemporaries and descendants. The slightly upturned rim is a notable variation; otherwise, this is a common shape that works very well for pieces of this size. A fine execution of the feather design pattern appears around the upper half, with rectangular interior forms in yellow adding a unique touch. A series of rectangular forms in green and the cream slip’s tone circles the upturned rim, with thick black lines defining the shapes’ edges. Despite a relatively small size, the jar looks and feels substantial and impressive. The bottom of the jar is signed Blue Corn, San Ildefonso Pueblo.

Crucita Gonzales Calabaza (1921-1999) Blue Corn was born at San Ildefonso Pueblo. She was encouraged by her grandmother, at an early age, to "forget school and become a potter." She went on to become one of the greatest and most versatile San Ildefonso ceramicists. She made pottery for over 60 years, working in black, red, and polychrome, using a variety of forms. Blue Corn’s house was located across the plaza from that of Maria Martinez, but there was no competition between the two artisans. Blue Corn was one of the most honored of twentieth century potters. She received the 1981 New Mexico Governor's Award—New Mexico's highest artistic award—and she was acclaimed for her artistic accomplishments in the Wall Street Journal and AMEPNKA, a Soviet Union journal. She won awards at State Fairs, Indian Market, and many other notable exhibitions.

Provenance: this Polychrome Pottery Jar with Feather Design by Blue Corn is from a private collection