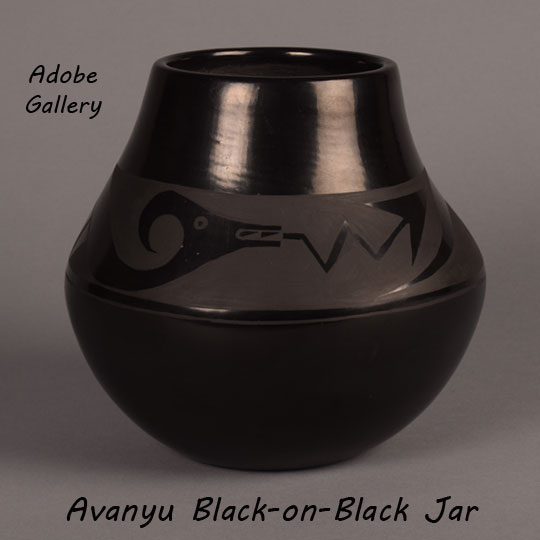 Artist Juan Tafoya was known not only as one of the most prolific male potters at San Ildefonso Pueblo, but for his willingness to experiment.  He tried new things with stone inlay, sgraffito incision, and firing methods.  While this black-on-black jar may more likely fall into a traditional category, with respect to Juan’s ceramic portfolio, this piece actually stands out, rather than blends in.  He was more active with redware, incised, inlay, carved work, and figurines than he was classic blackware. This jar does not disappoint, however, and truly showcases the artist's range of interest for creation of artworks.  Thick-walled and grounded, this jar is substantial and well formed.  A bowl-like curve to the base is folded inward at the midpoint, tapering its form to become conical and manifesting a rim that mirrors the vessel’s base in size and shape.

At the midpoint a thin black line is drawn, unbroken and shadowing the pictorial above it.  Just above this, the outline of an Avanyu curls in a wave of serpentine motion circling the jar.  Most Avanyu are depicted moving around and to the left, while this one moves counterclockwise.  Juan tended to do this with all his Avanyu motifs on pottery and shows here, a glimmer of his venturesome artistic tendencies.

Juan Tafoya (1949-2006) was a well-known San Ildefonso Pueblo potter who had been active since 1970.  He passed away prematurely at age 57 years.  Early on in his career, Juan began experimenting with firing techniques to achieve a brown/black combination and experimented with using turquoise as a decorative element.  He specialized in sgraffito designs where he would chip away at the polished slip to form a textured background.

According to a letter previously provided by Juan Tafoya, he was a life-long resident of San Ildefonso Pueblo and was involved in pottery making since he was first able to gather the materials that go into making pottery. He was taught the art of pottery making by his mother, Donicia Tafoya.

Condition:  There are some very light scratches to the surface of this Juan Tafoya jar and overall, it is in excellent condition.