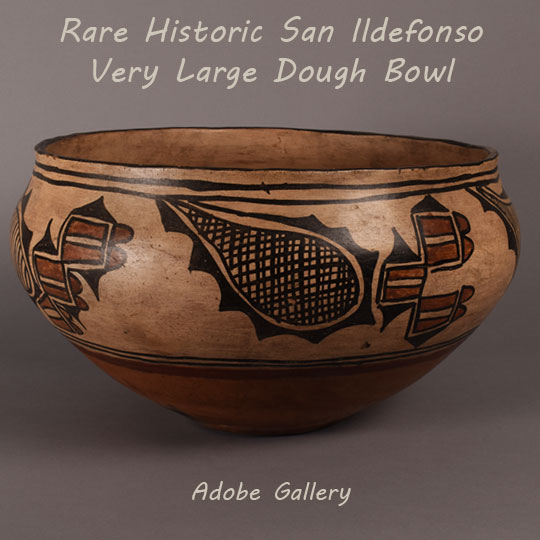 Dr. Bruce Bernstein is working on establishing the connection between male members who painted pottery for their mothers, sisters, and wives.  Few female potters painted their own wares, leaving the art painting to male members of the family.

Batkin stated that “Tonita Peña’s pots are among the most beautiful made at San Ildefonso at the turn of the century, and like Martina Vigil, Tonita Peña was among the last potters capable of making large storage jars.” Batkin 1991:59

If we assume that making large storage jars is equivalent to making large dough bowls, then perhaps this dough bowl could have been made by Martina Vigil or Tonita Peña.  The rag-wiped Cochiti slip applied to this bowl would be a strong indication that the bowl was made by Martina and painted by Florentino, who were responsible for introducing the slip to San Ildefonso around 1905, a date easily attributable to this bowl.

The dough bowl has a beautiful voluminous shape, flaring outward from the narrow base to the 17-inch mid point before turning inward just slightly and then upward to the rim. It is that change in directions, as the bowl rises, that establishes the beauty of the vessel shape.

The interior is covered in the same cream slip as was used on the exterior to which the design was applied.  The design consists of several black and red elements varying from seed-shapes to stepped bars. They are contained within upper and lower double framing lines.  Below the design panel is a traditional narrow red band separating the design from the underbody. The dough bowl is strikingly beautiful in shape, design, and condition.

Dough bowls from San Ildefonso Pueblo are relatively rare when compared to the many that were made at Santo Domingo and Zia Pueblos.  The pueblo, circa 1900, was small in numbers of families so perhaps large dough bowls were not needed for making large quantities of bread for feast days.  Perhaps smaller bowls served the purpose. Provenance:  From the collection of Dan and Lila Madtson. It is pictured in a room setting in their Canyon Road home, the photograph being published in the book "Santa Fe Style" by Christine Mather, Rizzoli International Publications, New York, 1986. A copy of the book is provided with the purchase.

- Batkin, Jonathan. "San Ildefonso” in Pottery of the Pueblos of New Mexico 1700-1940, The Taylor Museum of the Colorado Springs Fine arts Center. 1987