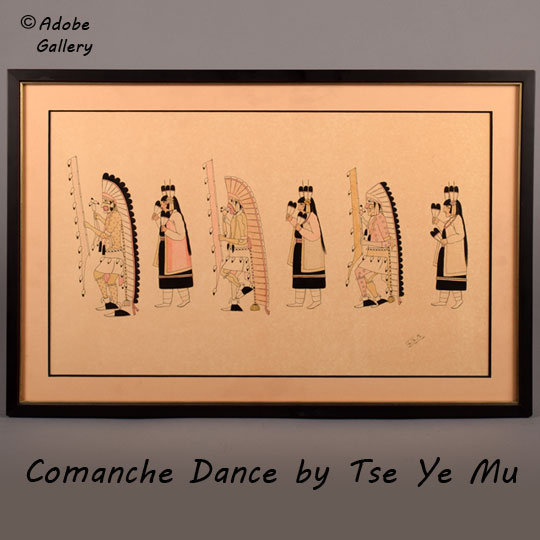 This excellent six-figure dance scene was created by Romando Vigil Tse Ye Mu, one of the early San Ildefonso Pueblo painters. In her book American Indian Painting of the Southwest and Plains Areas, Dorothy Dunn compared Tse Ye Mu’s work to that of his peer Julian Martinez: “Julian promoted a San Ildefonso Deer Dance style in which the dancers are shown in a forward-bending attitude, usually with one foot swinging out backward. The figures are drawn in an extremely sure, incisive manner, the snow-white shirts outlined with such fine, unwavering brushlines as appear to have been done with a silver stylus…Tse Ye Mu is one of the main exponents of this style, adapting it in a bolder, more massive manner than Julian’s. The style has had many interpreters in the Pueblo area in the past forty-five years.” [Dunn, 1968:111]

This painting by San Ildefonso Pueblo artist Tse Ye Mu depicts a Comanche Dance, which is performed by pueblo people but inspired by the traditions and regalia of the Comanche people. Here we see a line of six dancers that alternates between men and women. Those who are familiar with Pueblo dances will recognize the male dancers’ feathered headdresses and the female dancers’ colored coats as out of the ordinary. This Comanche-inspired attire and paraphernalia presents much for the viewer to explore, and Vigil’s work with the details is fine. His lines are incredibly crisp and sharp, and each figure has character despite being depicted in a similar position to those of his fellow dancers. Vigil’s colors are soft and wispy, with the exception of the bold black that appears in certain areas. These tones contrast beautifully, resulting in a piece that shows great vitality despite the absence of the brighter tones preferred by some of Vigil’s peers.  As is typical of works from this period, there is no background or environmental element of any kind—just dancers, performing their prayer for the benefit of all in attendance. This is a wonderful example of Romando Vigil’s work.

The painting is signed Tse Ye Mu in lower right. It is framed beautifully, with archival materials and UV protective glass.

Romando Vigil (1902-1978) Tse Ye Mu - Falling Cloud was one of the San Ildefonso self-taught artists in the early part of the 20th century, which places him among the group that is recognized as the earliest known pueblo painters. He was the father of Albert Vigil and cousin of Tonita Peña.

Vigil’s works have been published in many major texts related to Native painting. He exhibited widely during his career, and his works have been placed in many prominent public and private collections. Romando Vigil was married to Maria Martinez’s sister, Juanita.  Their daughter was Carmelita Dunlap.  For a number of years, he was employed by Walt Disney Studios as as a painter and illustrator in the 1950s.