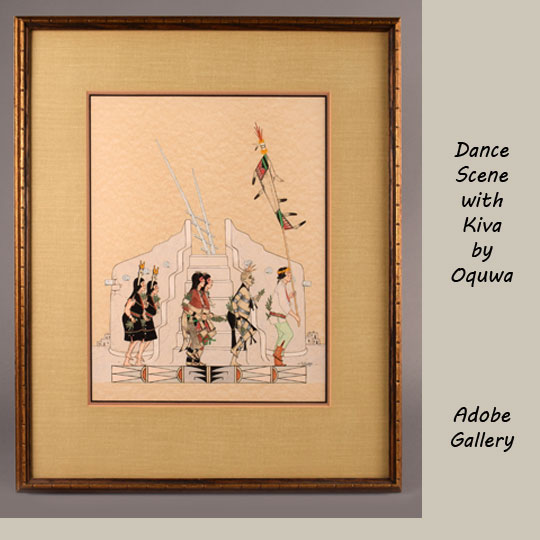 This original watercolor painting was made by San Ildefonso Pueblo artist J.D. Roybal. As per usual, it features a Pueblo ceremonial dance, but it strays from the norm with the inclusion of a kiva and pair of small clusters of buildings. Roybal included a stylized design block below the dancers’ feet, which is also typical of his work.  The triangular elements within this block are filled in with a light grayish blue, which then appears outside the block to form the earth, the kiva, and the buildings. Together, these elements form an attractive environment for the dancers.

The dance procession comprises six figures—four men and two women. A man leads the group, gripping his massive flag tightly as it blows in the wind. The next in line has become a koosa clown, which is a favorite subject of Roybal’s. Rattles and evergreen boughs appear in the hands of the pairs of dancers which follow behind. The women, who complete the group, wear traditional pueblo dresses and large tabletas as they perform their hypnotic movements. This is an immensely appealing dance scene by J.D. Roybal.

The painting is signed J.D. Roybal in lower right.  It is framed in a gold-stained carved frame, under a wide fabric matting with a black interior band.

José Desiderio “J.D.” Roybal (1922-1978), whose Tewa name was Oquwa (Rain God), was a well-known painter from San Ildefonso Pueblo. He was born on November 7, 1922, at San Ildefonso, the son of Tonita and Juan Cruz Roybal. He did a bit of painting in the 1930s but was not very productive until the 1950s. He was most productive in the 1960-1970 decade. His most popular subject matter was his rendition of the Tewa Clowns known as Koshare or Koosa. Often he presented them in a jovial manner. He used water-based paints throughout his career. His excellent detail in small paintings never went unnoticed. According to Clara Lee Tanner, “In most of his work there prevail fine color, excellent detail, small and fine outlines, gesturing figures, and a pleasing combination of heavy conventional themes with realistic subjects” [Tanner 1957:127]. Roybal passed away June 28, 1978.

Provenance: this J.D. Roybal Original Painting of Dance Scene with Kiva is from a private California collection