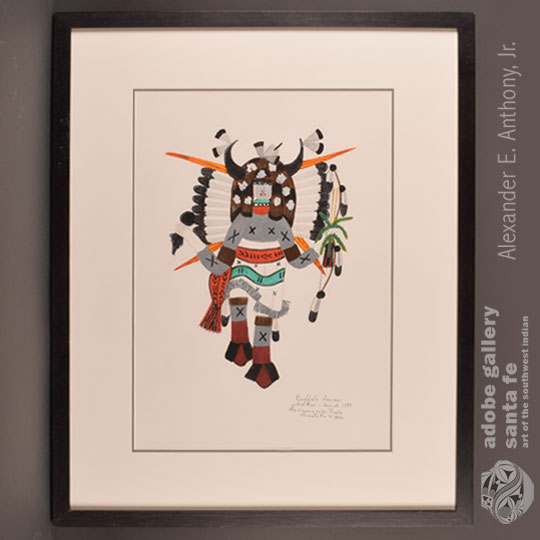 This painting by José Encarnacion Peña depicts a buffalo dancer in full regalia. His color usage is subdued and the details are very soft, as delicate as Dunn suggests.  The dancer wears a buffalo head cover with horns, an array of feathers from behind his head, a traditional kilt with an Avanyu design and tin cones from the edge of the kilt.  They flip up and down during the dance and provide a tingling sound imitating rain.  A hand woven red belt hangs on the right side.  The painting is signed in lower right and dated 1979, the year he passed away.

José Encarnacion Peña (1902-1979) Soqween - So Kwa A Weh (Frost on the Mountain) was among the many painters at San Ildefonso Pueblo working in the 1920s: namely, Tonita Peña, Richard Martínez, Luís Gonzales, Abel Sánchez, and Romando Vigil.

“A little-known San Ildefonso artist is Encarnación Peña. One of the early artists, he produced little through the years. Like so many others, he was greatly influenced by the more outstanding men of his village, particularly in delicacy of style in painting dancers.” (Dunn, 1957)

Peña is well represented in the collections of the Denver Art Museum, Cleveland Museum of Art, Museum of the American Indian (Smithsonian), Museum of Fine Arts Houston, Museum of Northern Arizona, Millicent Rogers Museum (Taos), Southwest Museum (Los Angeles) and the Laboratory of Anthropology of the Museum of New Mexico.

Among his awards is “Best example of original use of traditional material” awarded by SWAIA in 1957.

Condition: appears to be in original condition and has just recently been framed using archival materials.

Provenance: from a gentleman from Santa Fe