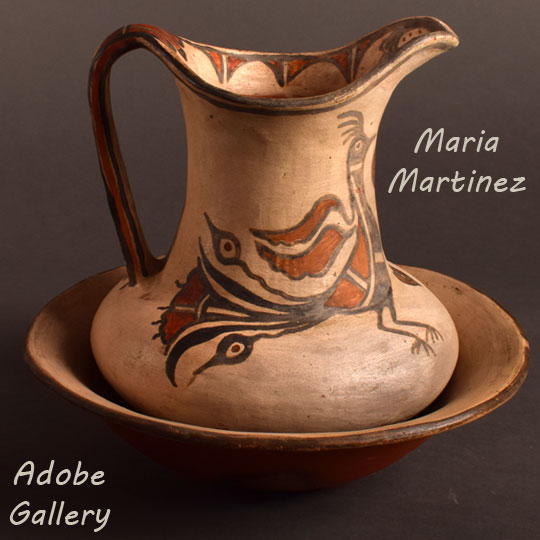 This is an amazing San Ildefonso Pueblo Polychrome Pottery Water Pitcher and Basin Set by Maria Martinez. Most likely no one remembers using a water pitcher and basin with which to freshen up but we all remember seeing such commercial ones in antique stores.  Adobe Gallery was not aware that any pueblo potter ever made one until this set appeared at the gallery from a Santa Fe resident.

The pitcher has a beautiful shape with its low and wide body and long slender neck and generous pouring spout.  Two large and exquisite polychrome birds fill the upper body and neck, and they are separated by three heart-shape designs.  The interior spout and rim are highly decorated with polychrome elements and the handle is fully decorated with red triangles outlined in black.  A red band was wiped on in the interior of the neck and three framing lines, with ceremonial line breaks, are near the base of the pitcher.

The pitcher sits comfortably in the bowl which is covered in a wiped-on cream slip.  A black band on the rim features a ceremonial line break.  The interior of the bowl is beautifully decorated with an elongated polychrome design with two hooked appendages.  The exterior of the bowl is slipped in red.  This set probably dates to circa 1910-20.

There are several possibilities to suggest as the potter and painter of this exquisite set. Maria Martinez is the most likely potter as it dates to 1910-1920, a time when Maria was making Polychrome wares. At the time, Crescencio Martinez, who was married to Maria's sister, Maximiliana (Anna), as well as Anna herself, were painting pottery for Maria. Maria, except for a few experimental pieces and for demonstrations, never painted her own pottery. Crescencio passed away at a young age during the 1918 Spanish flu epidemic. Julian Martinez, already an accomplished painter, rapidly became the leading painter of Maria's pottery.

Julian was exposed to and impressed by the work of Hopi-Tewa potter Nampeyo. Her influence on some of his work of the 1920s is very evident. [Spivey, 2003:23] The design on the interior of the bowl of this ensemble is very much a Hopi-Tewa revival of Sikyatki bird design. One can almost see the hand of Nampeyo in this design. The vessel shape of the pitcher has the graceful lower body of Maria's early Tewa jars, where it flares out and then rolls into a graceful neck.

It is quite likely that this pitcher and basin ensemble were made by Maria and painted by Julian in the early years of the nineteen hundreds. As with any early unsigned pottery, the makers are determined by clues in the construction of the vessel and in elements of the design.

Condition: both pitcher and bowl are in excellent structural condition.  The bowl has some paint abrasion where the pitcher made contact.

Provenance: this San Ildefonso Polychrome Water Pitcher and Basin Set is from a resident of Santa Fe who inherited it from her grandmother