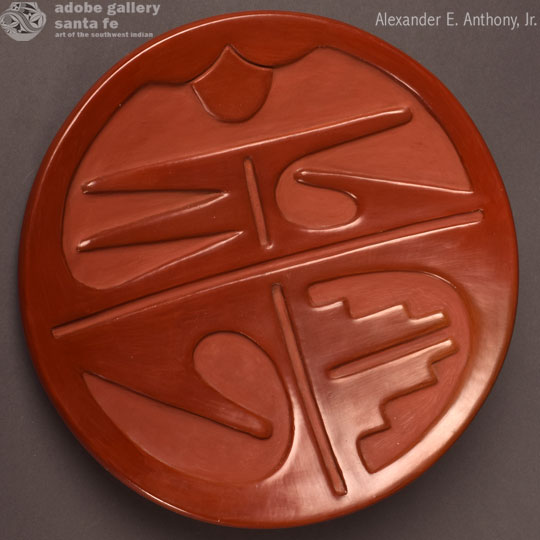 Rose Cata Gonzales was originally from Ohkay Owingeh (San Juan) Pueblo. She married Robert Gonzales of San Ildefonso Pueblo and moved there with him. Rose was a sister of Pomasena Sanchez. She was the mother of Jose H. Rainbird Gonzales, Tse-Pé Gonzales, and Marie Gonzales Yazzie. Rose learned pottery making from Ramona Sanchez Gonzales, her mother-in-law. Rose's parents died from the swine flu epidemic of 1918, leaving Rose and her sister Pomasena orphaned. The girls survived by staying at the Santa Fe Indian School. Mary Cata, a relative, adopted and cared for the girls. In the 1920s, Rose learned first how to make polished blackware. She then learned the new technique of black-on-black pottery, using a matte black paint for designs. Rose also learned the older technique of black-on-red pottery, most often associated with Tonita Martinez Roybal (1892-1945) Antonita and her mother. Rose was credited as the innovator of deep carved pottery around 1930 at San Ildefonso. She sometimes collaborated with her son, Tse-Pé, especially in duotones. She was active as a potter from 1929 to 1989.

Rose Gonzales (1900-1989) is listed as winning awards from 1965 through 1979 at Gallup Inter-tribal Indian Ceremonial, Santa Fe Indian Market, and New Mexico State Fair, however, this plate carries the notation that it was 1st Prize, Gallup 1938.  This may be one of the first recognitions of her extraordinary talent.

Tradition and Innovation: The Pottery of New Mexico's Pueblos (SOLD)
by Linda Eaton