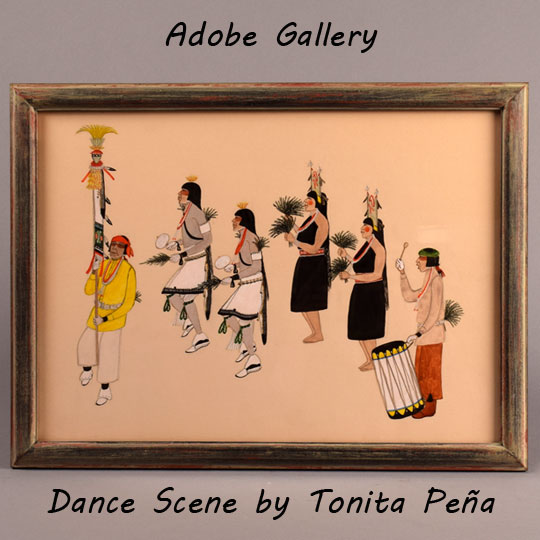 “It is completely unpretentious and authentic.  She might be called a conservative painter for she has set her own standards in keeping with tradition and has adhered to them throughout the years so consistently that, even beyond her death, she has never been superseded as the dean of Indian women painters.”

This piece features six participants in a ceremonial dance.  The procession is led by a flagbearer.  Two men follow, carrying rattles and evergreen boughs.  Two women trail behind, holding evergreen boughs.  A drummer, raising his drumstick and opening his mouth in song, finishes the procession.  Despite working within the boundaries of an established format, Peña’s works are instantly recognizable due to their rich character and generally warm, appealing look. “Her dancers are conventional, yet they are very living people,” according to Dunn.  We would offer this wonderful painting as proof of Dunn’s assertion.

Tonita Peña (1893-1949) Quah Ah was born in 1893 at the small New Mexico pueblo of San Ildefonso.  The pueblo is located on the Rio Grande, just north of Santa Fe. When Peña was just twelve years old, her mother passed away. Her father, unable to raise her while tending to his responsibilities at the pueblo, took her to live with her aunt and uncle at Cochiti Pueblo.  This was where she would spend the remainder of her life.

Tonita Peña was the only woman in the group of talented early pueblo artists referred to as The San Ildefonso Self-Taught Group, which included such noted artists as Julian Martinez, Alfonso Roybal, Abel Sanchez, Crescencio Martinez, and Encarnación Peña.  These artists were the earliest known pueblo painters. Today, their works are highly collectible because of both historical significance and quality.

Provenance: this Six-Figure Pueblo Dance Scene by Tonita Peña is from a private Arizona collection