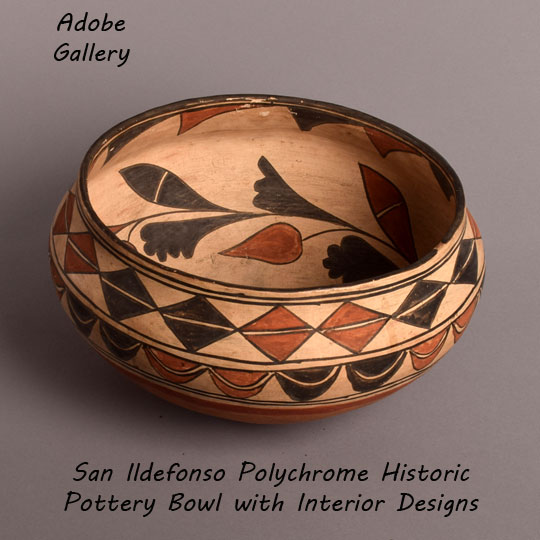 This historic pottery bowl comes from an unknown San Ildefonso Pueblo artist and likely dates to between 1905 and 1910. It is a fine example of San Ildefonso Polychrome pottery.  The bowl has a nice shape that we do not often see in San Ildefonso bowls.  Travelling up from the bowl’s widest point, we see a shoulder that curves inward and then back up.  Its path is similar to that of a water jar’s shoulder and rim, but with a curve that is a bit shallower.

The Bentonite slip appears to be that slip imported from Cochiti Pueblo which requires only rag wipe application, not stone polishing as required by the traditional San Ildefonso slip.  Martina Vigil and Florentino Montoya discovered the Cochiti slip, on frequent trips to visit at Cochiti, and brought it to the attention of San Ildefonso potters who eagerly accepted its use.  This switch to Cochiti slip occurred around 1905.

It is difficult to determine if this bowl is one made by Martina and painted by Florentino, but it is quite possible that it could be. The bowl’s exterior features two design bands separated by three pairs of banding lines.  The upper design, which circles the bowl’s shoulder, features black and red diamonds split in half by lines of cream slip.  The lower band, which begins at the bowl’s widest point, features semicircles split by lines of cream slip.  The jar’s rim is black, with the typical ceremonial line break.  On the interior just below the rim, an unbroken line circles the bowl.  From this line, triangles emerge, pointing down toward a wonderful interior cluster of leaves and flowers. All these interior designs lean together in the same direction, creating a gentle feeling of motion.

The bottom of the bowl is marked 449 in black marker.  A small label on the underside incorrectly identifies the bowl—From San Juan Pueblo Indians, Rio Grande River, New Mexico.

Condition: Good condition with a few abrasions on the interior near the rim (see below image). No restoration or repair