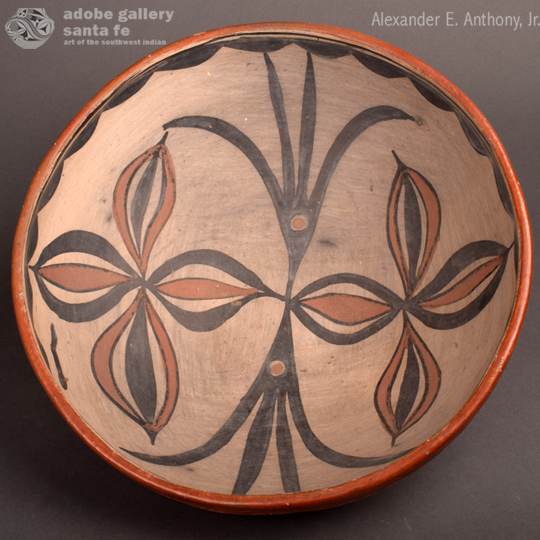 In the 1900 United States census, San Ildefonso Pueblo recorded a population of only 138 individuals—a very small pueblo.  It did not grow appreciably during the century, but grew in name because of the extraordinary artists who became recognized.  A small number of men gained fame as painters and the half dozen women potters began to be recognized as potters of note.  There is no question that Maria and Julian Martinez became famous in the early 1920s, but they were preceded by potters of the late 1800s who now have become highly recognized as innovators in the ceramic field.

There was Toña Peña Vigil (c.1840–c.1920), an outstanding potter of Polychrome wares who was still producing in 1915.  Even more famous today is her daughter, Martina Vigil (1856-1916) who, with her husband, Florentino Montoya (1858-1918) has now been recognized as the premier potter of San Ildefonso of the late 1800s.  Florentino is credited with painting pottery for his mother-in-law and for his wife, a sometime problem in determining whether a piece was made by mother or daughter.

Toña Peña Vigil retired from pottery making about the time her daughter and son-in-law moved to Cochiti Pueblo and discovered potters there using a white slip that required only rag polishing, different from that at their home pueblo which required the more laborious stone polishing, so it is doubtful that Toña ever used Cochiti slip. Martina and Florentino switched to using Cochiti slip and brought it to the attention of other San Ildefonso potters.

Martina and Florentino would make the little San Ildefonso Pueblo the center of innovative ceramic art.  It would be several decades later before Maria and Julian enhanced that reputation.  Thanks to extensive research by Jonathan Batkin, the importance of Toña Peña and Martina and Florentino became public knowledge.  Their pottery ranks at the top of modern pueblo pottery.

In adopting Cochiti slip around 1910, Martina and Florentino experimented, settling on using a lighter application of the slip than their Keresan potters, who favored a thick application.  The result is a grayish undertone.  Florentino’s designs often display a shift from red to black in alternating patterns on the same element.  The floral petals on the design of this bowl are a good example of such.  He alternated the exterior petals from solid black to a solid orange outlined in black.  The inner petals of the flowers alternate in the same manner.

The design of the bowl is confined to the interior, a sign that the bowl was most likely made for sale and not for use.  It would not normally be decorated on the interior if in use at the pueblo.  Santa Fe merchant Jake Gold and others were building thriving curio businesses in Santa Fe, New Mexico, after the arrival of the intercontinental train in 1880.  This was not overlooked by potters who were eager to find a market for something they could make with investment of only their time.

The rim of the San Ildefonso Pueblo Interior Design Dough Bowl was painted in red clay and extended about an inch down the exterior wall.  The red slip was stone polished.  The remainder of the exterior remained undecorated and the natural clay body was polished.  The bowl probably dates to the first quarter of the 20th century.