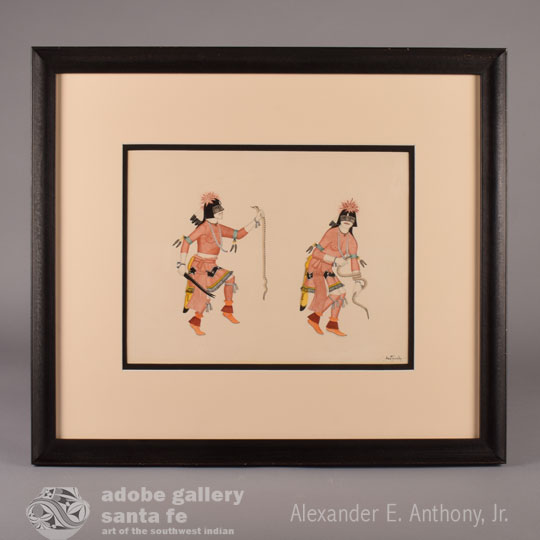 This example by early San Ildefonso Pueblo artist Awa Tsireh is a very strong work from one of the greatest Native American painters.  He was a member of the group known as the “San Ildefonso Self-Taught” artists, which places him among the earliest pueblo painters.  His works are sought after by collectors, and not just because of his status as one of the original pueblo painters. He was incredibly talented and is remembered by many as one of the best early Native painters. We are always pleased to handle his works, as they vary greatly in subject matter but are always completed with incredible skill.

This excellent untitled watercolor painting features a subject that we’ve not seen in any of our previous Awa Tsireh listings: a pair of snake dancers.  Awa Tsireh’s snake dancers are completed in the traditional pueblo style—in profile and in motion, with no background—save for a slight variation in one dancer’s position.  This dancer turns his head and upper body to his right, facing the viewer directly. He leans forward, dancing, with a long snake wrapped around his left arm. To his right is another participant. He carries a feather, with which he will stroke a nearby dancer’s snake in an effort to keep it calm.

As per Awa Tsireh’s usual approach, the dancers are completed in incredible detail, with exceptional linework and careful shading.  While many of his peers used thick black lines to define their subjects, Awa Tsireh used thin, consistent gray lines. These lines blend in with the colors that they contain, resulting in a more realistic feel and adding depth and dimension to areas that lesser artists might neglect.  Soft, earthy browns, reds and oranges dominate this image. They’re augmented with small touches of yellow and blue. Though the featured dance is potentially dangerous, the image feels quiet and peaceful.

The painting is signed Awa Tsireh in lower right.  It is placed underneath two layers of matting, with thin black mat under a wide off-white mat.

Alfonso Roybal (1898-1955) Awa Tsireh was many things to his pueblo of San Ildefonso: he was a farmer, pottery painter, museum employee, painter and silversmith.  He had many trades and skills, but is primarily remembered today as a painter and metalworker. His artworks are currently featured in “Awa Tsireh: Pueblo Painter and Metalsmith,” a comprehensive exhibition at Phoenix's Heard Museum. His works are included in many major public and private collections, including that of the Smithsonian Institution’s National Museum of the American Indian. He is generally regarded as one of the best pueblo painters, and his works continue to increase in value as his historical significance becomes more widely recognized.

Condition: this Original San Ildefonso Pueblo Painting of a Pair of Snake Dancers by Alfonso Roybal is in excellent condition