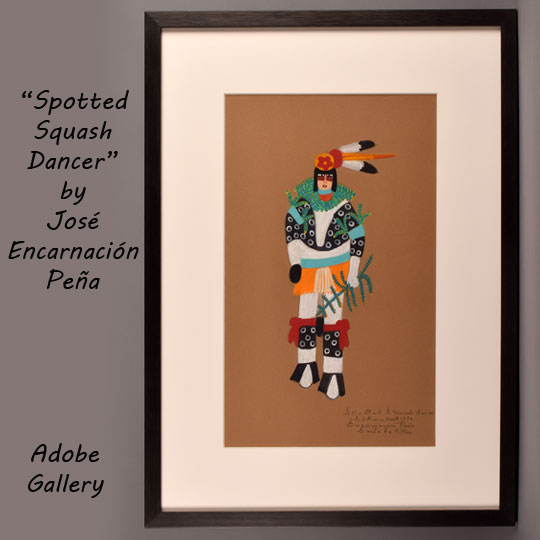 This original painting was created by San Ildefonso Pueblo artist José Encarnación Peña, or “Soqween.”  We have handled many works by this artist over the years, but we’re always happy to take a look at new offerings.  Pena‘s works are unique and appealing.  They almost always feature ceremonial dancers facing directly toward the viewer, inviting interaction with their charming faces.

This painting is a particularly strong example of Peña‘s single dancer format.  Peña‘s bold, colorful Squash Dancer carries a rattle and an evergreen bough.  He wears an evergreen ruff, a feathered headdress, and all of the appropriate dance regalia.  He’s a bit more detailed than we would expect from the artist, and made using a wider color palette, as well. But only just so—Peña includes what is necessary to identify his subject’s purpose but seems more focused on the impression as a whole than on the specifics.  The dancer is painted on brown paper, which is atypical for Peña but works very well here.

The painting is titled, signed, and dated in lower right.  It is framed very nicely, under acrylic and a wide white mat in a black wood frame.

José Encarnación Peña (1902-1979) Soqween - So Kwa A Weh (Frost on the Mountain) was painting at San Ildefonso Pueblo at the same time as Tonita Peña, Richard Martínez, Luís Gonzales, Abel Sánchez, and Romando Vigil.  In his early years, he was not as prolific as his peers. It was during the last ten years of his life that he became productive. He is represented in the collections of the Laboratory of Anthropology, Santa Fe; Museum of New Mexico; Denver Art Museum; and many others.  Though similar in spirit, Soqween’s works are very different from those of his contemporaries.  His works are simple, often using just two or three colors. His outlines, often done in light grey, are less important to his compositions than the thick blocks of bold colors with which they are filled.  These blocks of color are the tools with which he composed his subjects: pueblo dancers, in traditional regalia, often viewed head-on instead of in profile. Soqween’s style is a simple, charming, and unusual variation of the “flat” style that he and his peers were taught at the Santa Fe Indian School.