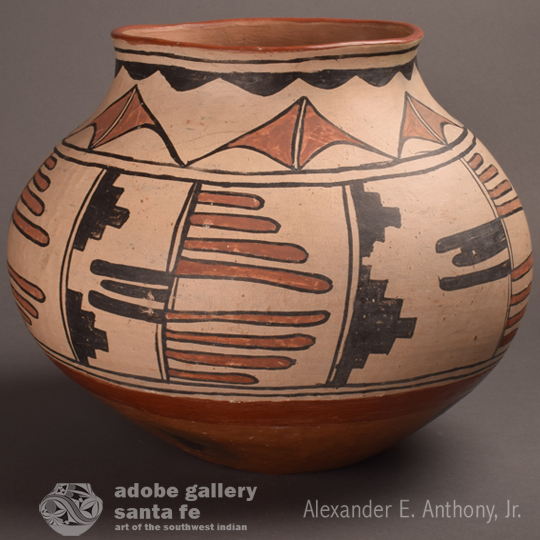 San Ildefonso Pueblo artist Marianita Roybal is the earliest potter identified by name. Jonathan Batkin states that she was an important potter until at least 1910. She was identified and listed in the 1850 U. S. Census Report. It is obvious that only the best potter and best painter of the time could have achieved such a result. The maker of this OLLA has been attributed as Marianita Roybal.

Long before Black-on-black pottery became the staple at San Ildefonso Pueblo, potters there had produced a variety of historic pottery types: Black-on-cream, Black-on-red and Polychrome types predominantly. Powhoge Polychrome, which was black-on-cream, in the 1850-1880 period, gave way to San Ildefonso Polychrome, starting in the 1890s, in which red paint was added to the design. Concurrently, some potters began abandoning the red paint on the rim in favor of black, around the same time.

This historic pottery jar, with a red rim, globular body and San Ildefonso slip, dates to circa 1890s. The use of red on the rim began to be changed to the use of black in the late 1800s and the globular body gave way to a more sculpted body at the same time. The San Ildefonso slip, which required stone polishing, began to give way to the Cochiti slip around 1905. These clues lead to assigning the date of 1890s to the jar.

The design on the jar is quite unique with an alternating panel executed in black elements adjacent to a panel executed in red that is outlined in black. The two unique designs are integrated in that three red bars outlined in black are flipped over and become black bars. The design around the neck appears to represent bird heads with long beaks and they are presented in mirror-image form, possibly reflecting the natural and the spiritual realms. The underbody remains in the natural tan color of the clay, perhaps representing the earth of the pueblo plaza where ceremonial functions occur.

There are many speculations about the iconography of pueblo pottery and most of those have been specified by non-pueblo persons. Whatever meanings designs have, if any, would not likely be shared by pueblo residents if there were a ceremonial meaning involved.

It is up to the collector to enjoy the beauty of a vessel and remain satisfied that it was made by a pueblo potter in the style and shape she wished to do. Many potters specify that the shape of a jar determines the design that will be applied. That is not determined until the jar is constructed. It remains for us, as collectors, to marvel at the creativity of the pueblo potters and to enjoy their works.

Condition: this San Ildefonso Pueblo Polychrome Large Historic Pottery OLLA by Marianita Roybal is in very good condition.  The jar tilts slightly but not to the extent that it is bothersome.

Provenance: from a gentleman from Kansas

Reference and Recommended Reading:  Pottery of the Pueblos of New Mexico 1700-1940 by Jonathan Batkin.