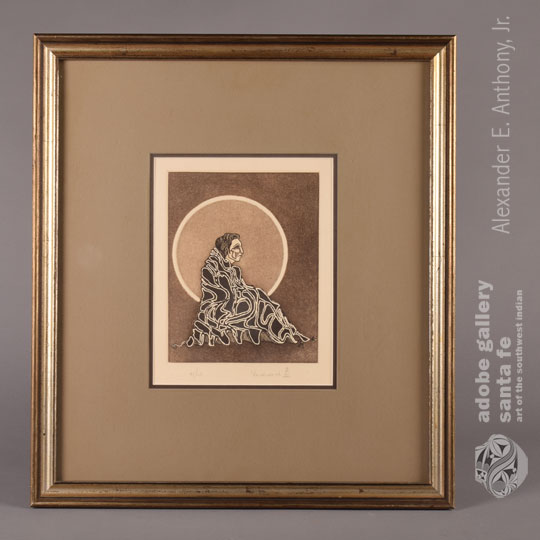 This aquatint etching by Santa Clara Pueblo artist Helen Hardin is titled “Contemplation.”  The single-color etching was printed by Ricardo C. Ximenes and William Boyson at Los Lunas, New Mexico’s El Cerro Graphics.  Printing began on July 12, 1980 and was completed on August 3, 1980. It was completed in an edition of 50, along with a handful of artist and printer’s proofs.  “Contemplation” is a beautiful image. Compositionally, it’s fairly simple, especially in comparison to the etchings completed later in Hardin’s printmaking career.  Hardin’s late-career etchings rivaled her original paintings in terms of depth, texture and intricacy of design. Its relative simplicity is one of its most endearing traits.

This piece, which was completed fairly early in her exploration of printmaking, features a single color and a straightforward subject. Hardin’s subject here is a Native person wrapped in a blanket. They’re outdoors, at night, sitting between the viewer and a massive full moon.  The blanket is made of dozens of unique shapes winding around, into and alongside one another; it has an appropriately hypnotic effect. Hardin’s use of a single color was a brilliant choice—the image provides an effective recreation of the moody, atmospheric Southwestern desert. Jay Scott described Hardin’s “Woman Series” etchings as “hymns to stoicism.”  This excellent image fits that description as well.

The etching is signed “Tsa-Sah-Wee-Eh” and numbered “48/50.”  It is marked with the shop and printer’s chop marks. It is framed beautifully, underneath a wide gray mat in a painted wood frame.

Helen Hardin (1943-1984) Tsa-Sah-Wee-Eh (or “Little Standing Spruce”) of Santa Clara Pueblo, was one of the most fascinating, complex, and engaging figures in the American Indian art world.  Hardin was born in 1943 to Santa Clara Pueblo painter Pablita Velarde and Caucasian civil servant Herbert Hardin. Inspired by her mother, she began creating and selling paintings as a teenager.  She went in a different direction than her mother and her mother’s peers, creating more contemporary work that depicted Native American symbols with striking geometric patterns.

Hardin's distinctive and compelling style became more fully realized in the 1970s, with a series of paintings of Katsina figures. These and her later works are immensely complex works of art that have been displayed in museums around the world.   Her personal explorations led her into the deeply affecting works of the very well-known “Woman” Series. Much of her work is concerned with the intellectual and physical struggle of her very existence—the struggle of woman versus man, patron versus artist, Indian versus Anglo, tradition versus progression.  Her art is complex and beautiful, at once forward-thinking and rooted in ancient tradition. Hardin completed 23 copper plate etchings between the years of 1980 and 1984. Many of these etchings are counted among her best and most collectible works. Hardin died of cancer in 1984.