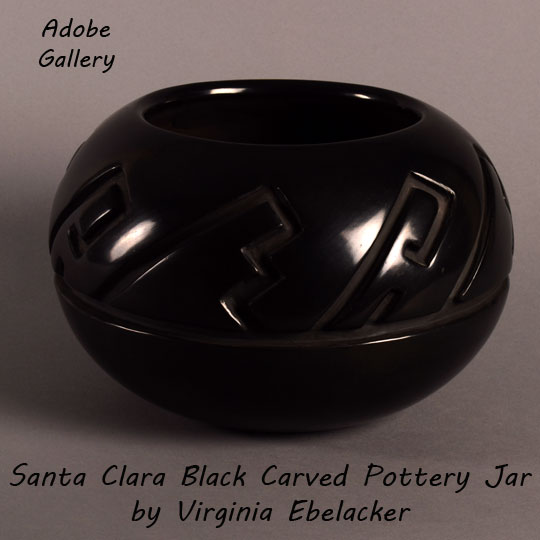 This Santa Clara Pueblo pottery jar by Virginia Ebelacker has a beautiful globular shape with a deeply carved ⅜-inch band at the midpoint of the jar, above which is the carved design, and below which is a polished surface.  The artist placed her designs at a 45-degree angle around the upper half of the jar.  The deeply carved outlines around the various design elements highlight each dramatically, varying in shape around the jar.

Virginia Ebelacker (1925 -2001), daughter of Margaret and Alcario Tafoya, and granddaughter of Sara Fina and Geronimo Tafoya, was not a prolific potter because she had a full-time job at Los Alamos National Labs. She worked in metallography and plastics and shaped and refined metal and plastics as a profession and was honored for her scientific contributions on both mediums. After returning home to Santa Clara Pueblo in the evenings, she worked on pottery briefly until bedtime. It was only after retirement from Los Alamos in 1968 that she was able to be more productive in pottery making.

She had been a consistent award winner at the New Mexico State Fair and Santa Fe Indian Market every year since 1969. She won many first prize awards and Best of Division awards on numerous occasions. She has been published in several magazines and her pottery is included in all major collections throughout the country. Virginia was certainly deserving of the accolades cast upon her as a truly outstanding artisan. This globular jar is testimony to that. Its form and balance are extraordinary, and the burnishing produced a most striking sheen to the finished product. This is an excellent work of art.

Provenance: this Santa Clara Pueblo Black Carved Pottery Jar by Virginia Ebelacker is from the estate of a family from New Mexico