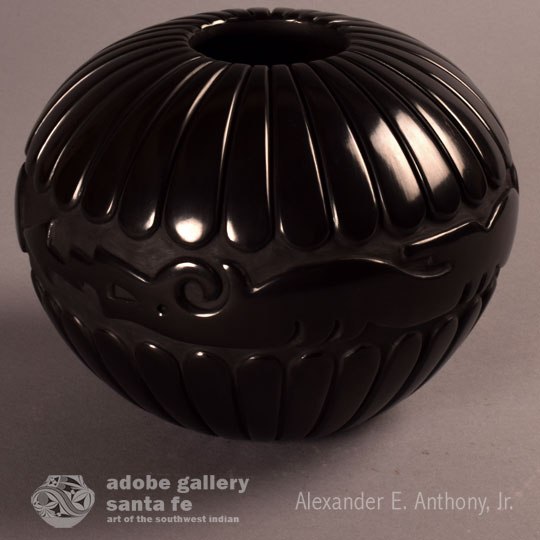 This carved blackware pottery jar was created by a gifted potter, Linda Tafoya-Sanchez of Santa Clara Pueblo. The polish is excellent, which is to be expected of this artist’s work. The central design band features two stylized Avanyu figures, each of which circles half of the jar’s widest point.  Each Avanyu has feet, a spiraled tail, and a kiva step pattern within its back. The carving here is shallow and precise, with smoothly, consistently rounded edges. They are contained within two series of vertical bars which reach up from the bottom and down from the rim. Each bar is identical in shape and size, which is particularly impressive when one is aware that this is a handmade piece of pottery.  This jar is an excellent example of a modern variation of an ancestral design motif. Linda Tafoya Sanchez (1962-) of Santa Clara Pueblo is known to some collectors by a previous married name: Linda Tafoya Oyenque.  She is a daughter of Lee and Betty Tafoya, and a granddaughter of Margaret Tafoya. She credits her aunt Mary Ester Archuleta for training her to be a potter. Linda has branched out from creating traditional burnished blackware with simple carved designs and expressed a great deal of creativity.  She mixes burnished black with matte black and has introduced use of micaceous clay in the mixture. Linda is a highly decorated artist whose awards are too numerous to mention here, but a couple honors certainly deserve pointing out. She has earned awards at the Santa Fe Indian Market, the Heard Museum and several other major exhibitions. One of her notable accolades is her appointment to create a piece for presentation to the Prince of Spain.