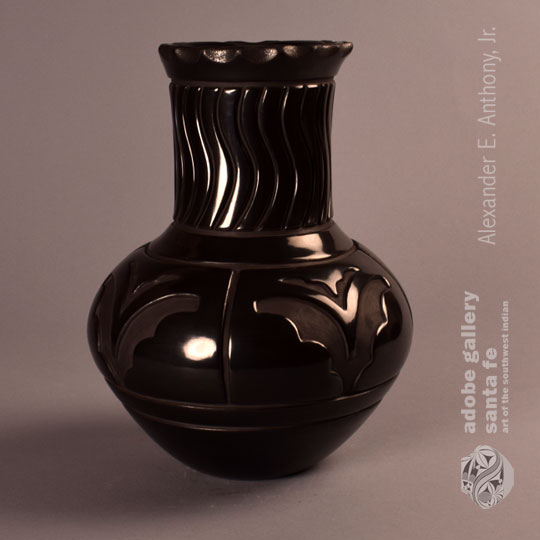 This blackware pottery jar by Santa Clara Pueblo artist Linda Tafoya-Sanchez has a wonderful shape and a variety of interesting carved designs.  Its lower half is a shape that is used often by Santa Clara potters of today. From this classic form a tall neck emerges, resulting in a piece that stands at nearly a foot tall.  Its rim flares outward, just slightly. The rim’s exterior is decorated with a series of matte-finished indentations. A polished area circles the rim’s interior, creating a design that looks like a flower when viewed directly from above.

A variety of designs are carved into the jar’s exterior.  Wavy parallel lines travel down its neck between a pair of framing lines.  An uncarved, polished band rests below the neck designs. Below this, the viewer is treated to a very strong design, which is repeated four times around the jar’s widest point.  It could be rain clouds, a rounded variation on kiva step designs, or the “spread-arm” design seen on the pottery of various pueblos. The four repetitions of this design are contained within framing lines and separated by vertical lines.  As per Tafoya-Sanchez’ usual, the polish is flawless. This is a beautiful piece from one of the many great potters of Santa Clara Pueblo.

Linda Tafoya-Sanchez (1962-) of Santa Clara Pueblo is known to some collectors by a previous married name: Linda Tafoya Oyenque.  She is a daughter of Lee and Betty Tafoya, and a granddaughter of Margaret Tafoya. She credits her aunt Mary Ester Archuleta for training her to be a potter. Linda has branched out from creating traditional burnished blackware with simple carved designs.  She sometimes mixes burnished black with matte black, and has introduced the use of micaceous clay in the mixture. Linda is a highly decorated artist whose awards are too numerous to mention here, but certain honors certainly deserves mention. She has earned awards at the Santa Fe Indian Market, the Heard Museum and several other major exhibitions. One of her notable accolades was her appointment to create a piece for presentation to the Prince of Spain.