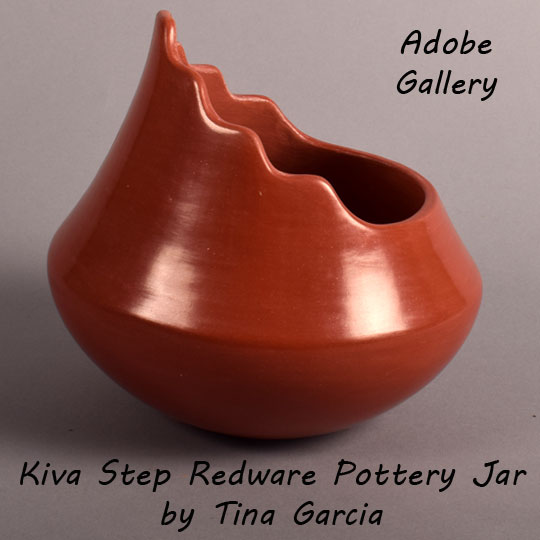 This redware kiva step pottery jar was made by Tina Garcia, an artist with roots at both Santa Clara and San Juan Pueblos.  Garcia is well known for elegant black and red pottery that often pay homage to the traditional forms made by her Tewa ancestors.  This particular piece is more unique in form than what we’re used to seeing from this artist.

Imagine the low, wide vessel shape that is often used by potters from neighboring San Ildefonso Pueblo, and you’ll have the starting point for this piece.  From there, Garcia added a rising kiva step addition.  It circles just over half of the jar’s rim.  At its peak, it reaches almost seven inches in height—nearly equal to its diameter.  The result is a jar that feels natural and well-balanced despite having a strong element that occupies only on one side.

The bottom of the jar is signed Tina Garcia, San Juan / Santa Clara.

Tina Garcia (1957 - 2005) was the granddaughter of Severa Tafoya. Her mother was from Santa Clara Pueblo and her father from Ohkay Owingeh. She learned pottery making from her grandmother and her aunt, Angela Baca.  She was producing blackware herself by the time she was eleven. When she decided to become a career potter, she spent time in museums studying the artform. She made pots that honored the traditional forms with a beautifully polished modern finish. The only decoration she used was the traditional Santa Clara bear paw, and she did so infrequently.

Provenance: this Santa Clara Pueblo Kiva Step Redware Pottery Jar by Tina Garcia is  from the collection of a California resident